Joe Askren, a professor of instruction in the School of Hospitality and Tourism Management on the Sarasota-Manatee campus, partnered with Priscila Veiga dos Santos, a professor of food science at the Universidade Estadual Paulista in São Paulo, Brazil to bring virtual global exchange to his ever-popular Introduction to Beer Science course. 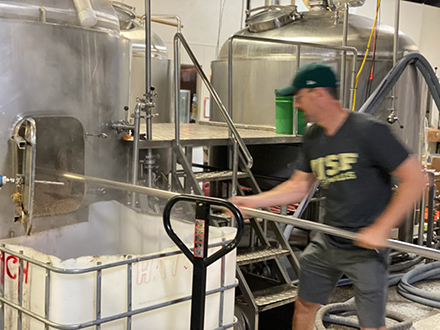 Askren’s “hands-on” course introduces USF students — all of whom are over the age of 21 — to the science of beer, the brewing process, pairings with food and brew pub operations.

“This is the first time we’ve ever collaborated with another university,” said Askren, who has been teaching the course since 2014. “This has been an incredible learning opportunity for both student and professor.”

“The class is lecture-based the first four weeks. Then we make two all-grain beers from scratch in our brewing lab on the Sarasota-Manatee campus. Thanks to the support from donors, we’ve been able to acquire some impressive home brewing equipment for our lab sessions.”

Askren’s students collaborated with students in Veiga dos Santos’ Industrial Fermentation Processes class via Padlet — a real-time web platform in which users can upload, organize and share content to virtual bulletin boards. The Brazilian students served as consultants, providing recommendations for how to modify and enhance the USF students’ recipes and produce a more robust final product.

“They have way more knowledge on these processes than I do,” said Pedro Abdo Breviglieri Nader, a fourth-year student enrolled in Askren’s course. “It was very interesting to see how deep you can go in the subject.”

“This has been the best class I’ve taken,” added Kyle Troupe, a fourth-year student majoring in criminology on the Sarasota-Manatee campus. “The amount of chemistry that goes into brewing beer is astounding. If you are to even use a different water source it can drastically change the flavor of the final beer.”

After the beer is brewed, Askren teaches the students about conditioning, carbonating, packing and marketing. He then takes them on tours of breweries in Tampa, St. Petersburg and Sarasota. The students’ final projects take various forms, from studies of beer trends to research on the third-party distribution system. 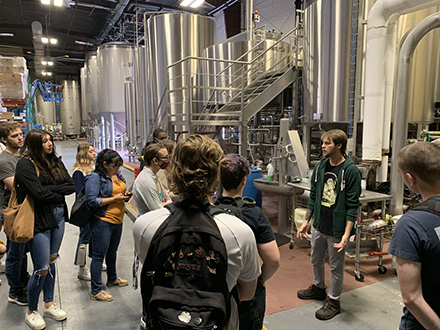 “You have these students who come in, they know nothing about brewing, and some of them are excited, some of them are a little intimidated but want to learn about it. A couple of them don’t even really like beer,” Askren said. “And it’s funny — by the end of the semester, some of those students are ordering equipment on Amazon. They really get into it.”

Both Nader and Troupe said they plan to invest in home brewing kits when the semester ends.

“Joe does a great job of keeping everything seem doable in a way that I feel like I could do it at home,” Nader said.

In an effort to meet student demand, course capacity will double from 20 to 40 available seats in the spring. Askren also plans to open it up to students under the age of 21.

“The class is super popular,” Askren said. “It fills up a semester before.”

Askren teaches a variety of food and beverage courses, including Restaurant Management (HFT 3263) and International Food & Culture (HFT 3894). He plans to launch a new online course titled History and Culture of Beer. Read more about it and other courses offered on the Sarasota-Manatee campus in the course catalogue.