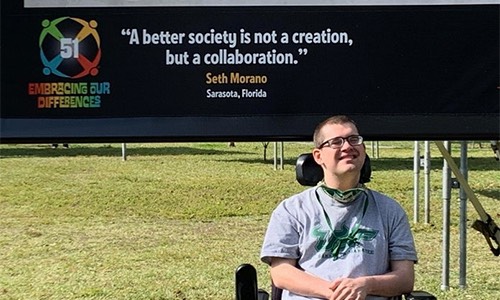 USF student Seth Morano is becoming a regular at the Embracing Our Differences art show in Sarasota, with organizers displaying Morano’s work for a fourth consecutive year.

The popular exhibit – which runs through April 1 at Bayfront Park – features extra-large posters paired with relevant, original quotations from participants worldwide. Show organizers receive thousands of entries yearly, but only 50 ever make the cut.

That the judges chose to display Morano’s quotations for four years running is astonishing, says the professional and technical communications major, a sophomore at the USF Sarasota-Manatee campus.

“I feel extremely blessed to be a part of this to make a difference in my community,” says Morano, 19.

Embracing Our Differences was designed to spotlight issues related to diversity, equity and inclusion, themes close to Morano’s heart and which resonate through his work. This year’s exhibit was no exception, with three of Morano’s quotations touching on the themes.

While Morano avoids politics in his quotes, he said, he couldn’t help but feel influenced by recent events, including George Floyd’s death, COVID-19 and the presidential election.

“I try to stay away from politics, but at the same time I believe there is a political undertone in wanting to create diversity and demand change,” he says. “We should all want a more diverse and inclusive world, and that may seem political, especially when you talk about demanding change, but these themes are also very emotional and they’re universal to all human beings.”

Morano’s three quotations for this year’s exhibit are:

Morano never sees the artist’s work before creating his quotes, but he looks at current events for inspiration. Show organizers match the quotes with artwork after receiving all the entries. The quotes and artwork are judged separately.

Two of Morano’s quotes have earned special mention. “Have the courage to stand up for what’s right, and have the wisdom to sit down and talk,” won Best in Show for 2019 in the student category, and his quote, “Defiance in the face of malicious bigotry shows true strength,” was runner-up that same year.

Morano says he doesn’t seek the limelight, but he hopes to contribute to public dialogue about diversity and inclusion through his work.

“I’m genuinely surprised that people have reacted favorably,” he says. “It makes me happy in that I can inspire others to take action through my work. More then ever we need to focus on what unites us, not on what divides us.

“I hope that my quotes inspire others to be better people, kinder people and to really think about the topics I bring up, like civil rights, and to really consider what that topic means to so many people, and not as an argument for a debate, but as a contribution to our society and our world.”