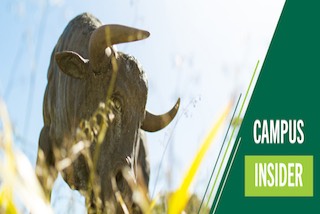 The sad reality for many refugees is that after fleeing their homeland to escape violence and oppression they might wait for months, even years, in over-crowded camps to resolve of their resettlement cases.

“We as westerners are profoundly affected by the stories of refugees, and not just by the conditions they’re forced to live in, but by the courageous spirit they carry and by their humanity,” said Justin Hilton, founder of the refugee-assistance agency A Safe Place International.

Established by the United Nations in 2000, World Refugee Day acknowledges the accomplishments and contributions of refugees globally, including in Florida where more than 15,000 refugees were welcomed in the past fiscal year. Over the years, the USF Sarasota-Manatee campus has hosted several local World Refugee Day events.

Joining Hilton for the 90-minute online session were:

The celebration was organized by Jody McBrien, a professor in the USF School of Interdisciplinary Global Studies, with help from Lutheran Services of Florida and the Southwest Florida Community Foundation. 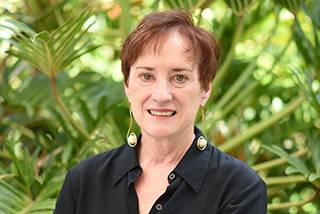 Hilton told participants during the session that he’s continually moved both by the plight of refugees and their stories of survival. Too often, refugees are forced to live in camps for years before learning whether they’ll be sent back, permitted to resettle elsewhere in the country or be able to emigrate to Europe, the United States or another nation.

As a result, they’re often ignored and forgotten by the outside world, and the camps can be overcrowded, unsanitary and dangerous. Conditions can be worse for LGTB people, who often experience taunts and attacks from other refugees and local residents.

Hilton’s organization advocates for LGTB refugees, helps with their resettlement cases and, when possible, relocates them to apartments to await the disposition of their cases.

“What’s happening here is a crisis of disconnection,” he said. “There’s no way we would let these atrocities happen to people if they were right in front of us, but they’re off somewhere in a remote, dehumanized area.”

Two of McBrien’s former students, Massie and Wallace, addressed participants about their experience during a class exercise connecting online with refugees from Syria and Venezuela to hear about their journeys and aspirations. The students and refugees connected through NaTakallam, an organization that employs refugees for translation services and online tutoring.

“It was a life-changing amazing experience, connecting with the women,” said Massie, who graduated in the spring with an interdisciplinary social sciences degree. “I never would have imagined I would get the chance to talk with a refugee, especially online from another country. It was an amazing learning experience.”

More than 50 people attended the World Refugee Day celebration, which also included comments from Netram, Sindorf and Triana. Turruelles, a caseworker at Lutheran Services of Florida, related her journey emigrating from Cuba seven years ago. She traveled to Canada with her husband and two children before resettling in Florida.

“It was a whole new world for us, not just with the language, but also the people and the system,” she said. “Everything was challenging. I’m just grateful I’m here. I came here seven years ago, but now I can say I am an American.”

McBrien has focused much of her scholarly research on refugees. She has visited nine countries over the past 18 years to evaluate educational policies for refugees and identify best practices.

Last year, she was selected as a Fulbright Specialist to evaluate the newly constructed Mangere Refugee Reception Centre in New Zealand. Her latest book is “Educational Policies and Practices of English-Speaking Refugee Resettlement Countries” (Brill/Sense).

“I’ve been doing this work for many years and what I receive is so much greater than anything I’ve ever given,” she said. “Just the opportunity to get to know refugees, to learn about their astounding courage, is inspiring and a real gift.”

More than 100 members of the USF Sarasota-Manatee faculty and staff participated in a “Community Conversation” about racism, perceptions of race and the factors that contribute to ideas and impressions about race during a special virtual town hall meeting on Friday, June 12.

Washington has served as a consultant in higher education for more than 34 years and holds a PhD in college student development from the University of Maryland College Park. He founded the Washington Consulting Group – a multicultural organizational development firm – and is the president and a founder of the Social Justice Training Institute. He also serves as a visiting professor at Salem State University (Massachusetts).

The Community Conversation was designed to engage faculty and staff in a candid discussion following the death of African-American George Floyd while in police custody and the ensuing protests, and encourage participants to examine their perceptions about race based on experiences, upbringing, geography and other factors.

The hour-long virtual conversation was delivered on Microsoft Teams and included exercises where faculty and staff engaged in building “word clouds” and responding to poll questions in real time, to express their feelings and views about race-related issues.

Washington addressed the campus at the invitation of Karen A. Holbrook, chancellor of the USF Sarasota-Manatee campus, and Corey Posey, diversity, equity and inclusion officer.

Washington challenged participants to consider these factors when talking about race:

Washington closed the presentation by encouraging participants to become more intentional about conversations.

“Most people don’t engage properly in conversations about race because they don’t know how to talk about,” he said. “People often walk on egg shells and avoid the issue. But the mission of higher education is to prepare the next generation of leaders. We need to be our authentic selves and have authentic conversations. The best way to do that is to build relationships.”

Senapati recognized with Women in Leadership and Philanthropy Award

Su Senapati, an English instructor at the USF Sarasota-Manatee campus, has been named one of the winners of the 2020 Women in Leadership and Philanthropy (WLP) Award for her research on Anthropocene Fiction. 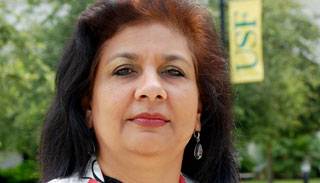 “This award draws much-needed attention to the urgent issue of climate change and will compel all to engage in the issue through the noncontroversial medium of fiction and not just the scientists,” she said.

The award comes with a $5,000 research grant. Senapati said she will use the funds to continue her research into climate fiction, also known as “cli-fi.”

In 2016, she created a course called “The Literature of Climate Change: Climate Fiction,” the first such course to be offered in the state of Florida that was enthusiastically embraced by students.

Currently, the course is in process for the State Course Numbering System (SCNS) Additionally, it has been approved as a general education course so that it becomes available to all USF students who wish to take the course and not just to students with English majors.

Senapati was to receive her award at the WLP Annual Awards Dinner on April 8 at the Gibbons Alumni Center on USF’s Tampa campus, but because of COVID-19 the event was postponed until Aug. 27.

For more about USF, visit www.usf.edu.