This week, University of South Florida’s Sarasota-Manatee campus leadership unveiled Sacrifice, a monument honoring active-duty military, veterans and their families. Originally on display at Patriot Plaza, the monument, which features a thick piece of laminated glass imprinted with a poem and a photographic image representative of military life, was generously donated by The Patterson Foundation in recognition of USF’s continued contribution to active-duty military, veterans and their families.

“The Patterson Foundation chose the USF Sarasota-Manatee campus to be the monument’s new home because of the meaningful relationship the university has with its military-connected students,” said Carlos Moreira, director of campus engagement for veteran success and alumni affairs.

This spring, the Office of Veteran Success, which provides specialized programs and services to veterans, eligible dependents, active-duty service members and members of the Selected Reserve, connected with 7,389 students, 265 of whom call the Sarasota-Manatee campus home. “That’s 14.8% of the USF student body,” said Moreira. “We create unique opportunities and events for these students as well as provide guidance as they prepare for the next phase in their lives—whether that be continuing education or a meaningful career.”

Just before the monument was unveiled, Mark Heise, a security officer at the Sarasota-Manatee campus who served in the Army National Guard for 13 years, read the poem inscribed on the monument’s façade: 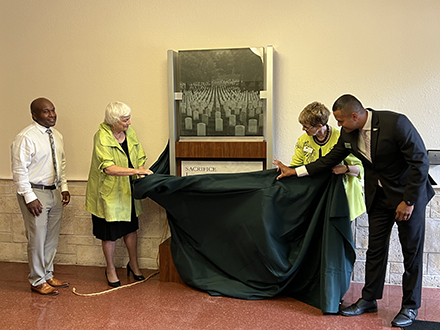 "I tell them to remember
that whenever they see the American flag
or hear the national anthem playing,
when they’re saying the
Pledge of Allegiance—
and especially when they hear “Taps,”
that it stands for something,
and always remember,
the sacrifices
that have been made."

Previously on display at the Sarasota National Cemetery, Sacrifice is part of a larger installation, which depicts the stories of the men, women and families who serve or have served the nation. The artist, Larry Kirkland, considers these testimonies an extension of the untold stories indicated by the cemetery’s headstones.

In the last couple of years, as some of the monuments began to delaminate, The Patterson Foundation replaced the glass and photos, and placed the original art in storage. The Patterson Foundation then partnered with local veteran organizations to display each piece of art indoors in places of honor such as the Office of Veteran Success on the USF Sarasota-Manatee campus.

USF is one of only 15 universities in the nation selected as a Tillman Partnership University of the Pat Tillman Foundation, a selection based on innovative veteran-specific support services and proven culture of community for military families. In 2021, USF ranked 2nd in Florida and 19th among all public four-year U.S. institutions in the 2021 Military Times Best: Colleges and among the top 20 best public institutions in the Military Times Best for Vets: Colleges. And, this year, U.S. News and World Report ranked USF as a Best College for Veterans.

Most recently, USF’s Office of Veteran Success has partnered with The Patterson Foundation to offer a scholarship program. “We are also working with the School of Hospitality and Tourism Management to provide crucial certification to student veterans across USF and with campus leadership to provide certification in critical creative design thinking to military personnel,” said Moreira. “The Office of Veterans Success is successful in supporting its military-connected students because of our wonderful community.”

The monument can be found in the FCCI Main Rotunda at the University of South Florida Sarasota-Manatee campus.

About the Office of Veteran Success at the University of South Florida
The Office of Veteran Success provides specialized programs and services to veterans, eligible dependents, active-duty service members, and members of the Selected Reserve. Services include assistance with university admissions, scholarships, VA benefits, graduation, employment opportunities and the continued pursuit of higher education. Located on the USF Sarasota-Manatee campus, the Military and Veterans Success Center offers veterans and their dependents a sense of community where they can connect with other student veterans and access important education resources.