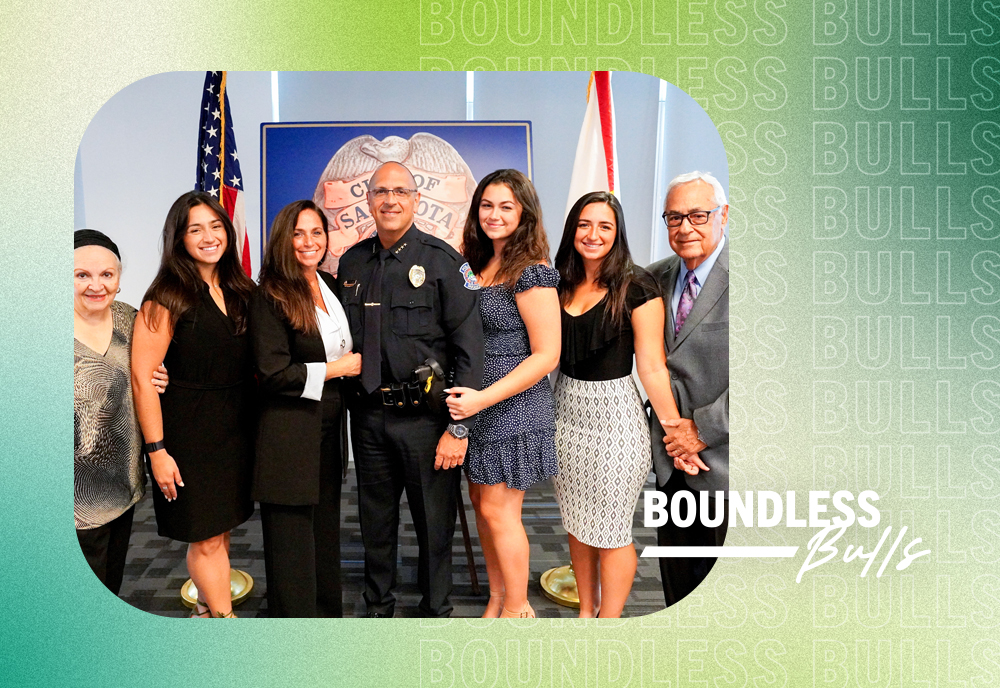 Rex Troche, a University of South Florida alumnus — and dad to three current USF students — is the city of Sarasota’s first Hispanic police chief. However, his goal to establish a lasting legacy as a community leader in Sarasota goes beyond his ethnicity.

The son of Puerto Rican immigrants, Troche acknowledged that his historical distinction matters to him and, more importantly, to the community he serves, like residents on his old beat in Newtown, a predominantly minority neighborhood located between the USF Sarasota-Manatee campus and downtown Sarasota.

"What an honor to be the first Hispanic police chief and be out in the community meeting and greeting people who look like me … and Black kids and brown kids,” said Troche, who was appointed chief in April. “To walk the streets in Newtown and to see people come up to me and have them say, ‘Hey, you’re my chief.’ That’s something we’ve never had before.”

Having his 190 officers be a positive presence in Sarasota, and collaborating with other agencies and community members is essential to Troche, especially in a time of complex criminal justice challenges, limited resources and heightened attention on potential racial tensions. As an example, Troche touted his department’s Community Response Teams, made of up of respected community members who serve as a two-way conduit for tips and other information between police and residents when there is a shooting or other incident that might be exacerbated by misinformation about what happened.

According to the 2020 census, about a third of Sarasota’s roughly 55,000 residents are Hispanic or Black.

“At the end of the day, everyone wants a seat at the table, and everyone wants someone who looks like them at the table,” Troche said. “I believe that it’s very important when I go out and I meet people and go to certain functions, that they understand where I come from, what I have done and some day they can do it. And maybe someday, one of these kids I am shaking hands with will be the next police chief.”

Where Troche comes from is Chicago, where his father was a police officer for 26 years. Growing up, Troche saw first-hand the positive impact the police could have on a community.

“My father was in community policing so I got to go with him to all these community policing events,” Troche said. “I was able to feed the elderly hot dogs, hamburgers on weekends and sometimes that was the only meal they would ever have. … We took kids to movie theaters and those kids became my friends.”

When Troche was 11 years old, his eldest brother Ronnie was murdered in Rockford, Ill., outside of Chicago.

“That changed my life,” Troche said. “I spent a summer in a courthouse reading law books because 11-year-old me thought I could crack the case ... and help put my brother’s killers behind bars.”

Despite the example set by his father and another older brother, Randy, who also was a police officer, and the death of Ronnie, Chief Troche wasn’t initially sure he wanted a career in police work. A ride-along with his brother had showed him maybe the job wasn’t for him.

But after the family moved to Florida, Troche earned a degree in criminal justice from USF in 1994 and in 1997 he joined the police department in Largo. Five years later, he and his wife Kelly moved their family to Sarasota, where he steadily rose through the ranks of the Sarasota Police Department, before being named interim chief in 2021.

Police chief is a high-profile, high-stress job. And while being Sarasota’s first Hispanic chief is an honor — “It’s an honor to be the first of anything.” — Troche said it also comes with “the pressure of setting a bar because you don’t want to be the first Hispanic chief and then something happens where they now look at Hispanic officers as though they are not able to handle the challenge required to be a police chief.”

Troche, who also holds a master’s degree from St. Leo University, credits his time at USF with helping prepare him to meet the intellectual rigors of police work and leading a department.

“I can tell you that if wasn’t for my education at the University of South Florida, the foundation that I came into this profession 25 years ago would not have been there for me,” he said. “By having that education, by subsequently getting my master’s at St. Leo, that really tightened me up to solving problems and writing in-depth papers, which helped me at the executive level here. When I was looking at a problem, I didn’t just scratch the surface, I was able to look at other problems we didn’t foresee. A college education definitely helps you in that regard.”

Troche said his success would not have been possible without the support of his wife Kelly, who he described as the “rock” of their family.

“Early on in our relationship, when she knew I would be going into police work, we made a decision that we were going to sacrifice for our children, and she decided she was going to stay home. We wanted to make sure our kids were raised at home, they had Mom at home cooking meals, going over the alphabet,” Troche said. “We sacrificed for a long time.”

“It was important for us to be an example for our children, and that was one of the reasons I did obtain my master’s degree because we wanted to make sure our kids understood the importance of education in order to further yourself in the world,” Troche said. “My wife, again staying home, made sure they had whatever they needed.”

Legacy is important to Troche, whether it’s following the example of his father, honoring the memory of his late brother or showing his daughters the value of hard work, sacrifice and improving yourself through education.

That’s an attitude that drives his work as Sarasota’s police chief.

Boundless Bulls is a collection of stories about what truly makes USF great — the people. It is a focus on our community footprint, our impact and the trajectory of where we can go together. To nominate a member of the USF Sarasota-Manatee campus community for Boundless Bulls, please fill out this submission form.