Nine professors and students from the University of Novi Sad in Serbia traveled to the University of South Florida’s Sarasota-Manatee campus in November as part of a U.S. Embassy Partnership grant designed to foster a long-term relationship between the hospitality and tourism programs at the two schools. An equal number of USF professors and students visited Serbia in October.

The aim of the grant, titled “Immersive Technologies for Cross-Cultural Tourism Development: U.S. and Serbia on a Pathway to Digital Transformation,” is to foster an informative and cultural exchange between faculty and students at USF and the University of Novi Sad. 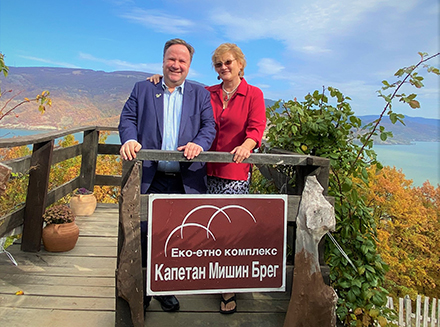 During their visit to the Sarasota-Manatee campus on Nov. 17, the Serbian visitors were featured at a “Lunch and Learn” event, hosted by USF World, at which Professor Lazar Lazic, dean of the Department of Geography, Tourism and Hotel Management at the University of Novi Sad, presented a slide show featuring dozens of castles, palaces, museums and other cultural heritage sites in Serbia. The USF contingent visited many of the sites during their earlier visit this fall to the Balkan nation, Carmer said.

The Serbian visitors then enjoyed a traditional American Thanksgiving meal during a Friendsgiving event in the FCCI Rotunda.

“Learning from one another is the essence and joy of education,” Carmer said.

During their visit to Florida, the Serbian delegation toured several locations that highlight the importance of hospitality and tourism industry to the state, including Busch Gardens, St. Armand’s Circle and downtown Sarasota. They also visited USF’s Access 3D Lab.

“This is an important step forward highlighting digital and virtualization technologies for tourism,” Hansen said. “We saw great examples in Serbia of hologram exhibits and virtual reality stations at tourism sites and we hope to create more of that here in Florida with our USF resources.”

In a few weeks, Hansen will join the School of Hospitality and Tourism Management as an associate professor of instruction and will coordinate further programming and collaborations with the University of Novi Sad.

Lazic and another Serbian professor, Miroslav Vujicic, said they were impressed by how welcoming their USF hosts were, and by the size and diversity of what they had seen during their visit.

“Everything is huge,” Lazic said.

Carmer and the Serbian professors see many potential long-term benefits of a relationship between their two schools. For example, there could be future student exchanges, and Vujicic said they anticipate returning to Serbia with ideas to help the hospitality industry in his country, which currently is visited by a relatively small number of American tourists.

“This is just the first step,” Vujicic said.