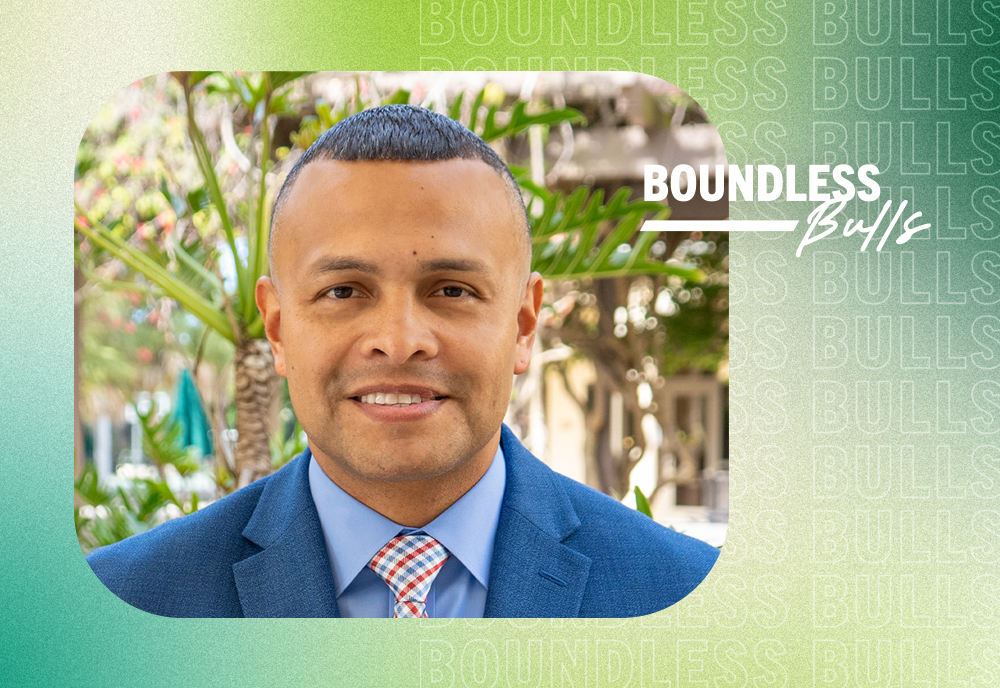 Staff Spotlight | Carlos Moreira looks out for his 'band of brothers'

Some 10% of the students at the University of South Florida Sarasota-Manatee are “military connected,” meaning they are on active duty, in the reserves or National Guard or are a veteran. Or maybe their parents or other family member are serving or served.

At the Military and Veterans Success Center on the Sarasota-Manatee campus, one of their own, Carlos Moreira, helps military-connected students address their unique challenges and find the support and resources – everything from a scholarship to a place to socialize with other veterans to just a sympathetic ear – they might need to succeed, both in and out of the classroom.

"A lot of times we don’t think of the stress that veteran students are going through. But if we’re able to minimize some of that stress, it will allow them to be more successful,” said Moreira, a U.S. Marine Corp veteran and director of campus engagement for veteran success and alumni affairs at the Sarasota-Manatee campus. “And then after school, what's next? Once you graduate, are you going to look for a job? Are you going to go into continuing education, probably go for another degree? How can we help you with your next chapter?

“It’s just us looking out for our brothers and sisters,” Moreira said.

Moreira, who was living in the Bronx, N.Y., was still a teenager when he joined the Marines in January 2000 when he traveled to Parris Island, S.C., for basic training. That started a 15-year active-duty career that took him to various locales, including Afghanistan in 2014.

Drawn to Sarasota because his brother and his family lived in the area, Moreira enrolled at the Sarasota-Manatee campus in 2015, eventually earning undergraduate degrees in finance and risk management and insurance, and a master of business administration.

Moreira continues to wear the uniform as a first sergeant with a United States Marine Reserve unit based in Brooklyn, N.Y.

With Veterans Day approaching on Nov. 11, we chatted with Moreira about his time in the military, his work at USF and why he is committed to the 9/11 remembrance ceremony he organizes each year on the Sarasota-Manatee campus.

What does Veterans Day mean for you?

Moreira: It recognizes those individuals who served who are still alive and thank them for their service. Many times, we only think about Veterans Day to honor them and be thankful to them. But there's a lot more that goes behind the scenes that people don't understand. Just the mindset, that stress that you go through and that your family's going through because they’re worrying about you.

As veterans, we sign a blank check for our government. At any point in time, we could be sent to war. There's nothing that we can do other than strap on our packs and lace our boots, and go and say goodbye to our families. That dedication to give up our lives, to support the Constitution and the nation, is what sometimes people don't understand. They say, ‘Thank you for your service,’ and carry on, but some don’t have a real understanding of the sacrifice they made. Because people don't understand doesn't mean that they don't care. They're still grateful, they're still thankful. But sometimes they really don't understand what veterans really went through. Some of them went to a combat zone and are doing great. Some of them came back, but they're not doing so great, meaning they probably had an injury and now they need support and assistance.

Why did you join the Marine Corps?

Moreira: I had graduated from high school and during the spring of 1999 I was working for my mom. I wanted to go to college, but I was extremely independent. I just wanted to do things on my own. And I really wanted to be challenged.

Growing up, I had seen the Marine Corps commercial of the Marine fighting the dragon. It was exciting to me. So, I went to the recruiting station in Bronx, N.Y. I went upstairs, where all the services had offices. I was just standing there, and I'm like, OK, I don't know which way I'm going to go. So, the Army guy came out and he started being the typical recruiter, telling me about the Army and everything like that. And then the Marine stepped out and heard the conversation. He's like, ‘Oh, you're looking into joining the service. If you want to be part of a real branch of service, and you want a real challenge, and if you want to get your hands dirty, come see us,' and just walked off. The Marine didn't sell me anything. He told me if I wanted the honor and to be one of the best, to go see him.

You reported to boot camp in Parris Island, S.C., in January 2000. About a year and half later, the U.S. was attacked on 9/11. Did that cause you to rethink your decision to join the military?

The past few years, you have been the organizer of the annual 9/11 memorial event on the Sarasota-Manatee campus. What do you hope people take from the ceremony?

Moreira: I hope we are educating people about what took place, especially our students. Our students, more and more, were not even born during that time. Secondly, we want to remember and honor those who passed. Also, right now, we barely have anyone alive who served in World War II. Same thing with Vietnam. But with 9/11 there are many who are still alive and can tell their story.

Every guest speaker we have had was there. They are alive, they still have a story. They can come and tell us what they went through. We just want to keep telling the story and remind people of what took place. That incident shaped our history, it shifted our lives. We had never been attacked here at home, other than at Pearl Harbor. I do get emails and after every event I talk to people who say, ‘Wow, that was another great, phenomenal speaker because the story they tell is from a different perspective.’ And people remember exactly where they were and what they were doing when 9/11 took place.

Moreira: I would say it is a mix of things. Definitely the discipline and the sacrifice, but also caring for and loving others. That ties into everything that I do at USF. I always try to find opportunities to meet the needs of veterans, the student veteran population, and find opportunities for our veteran students or military connected students, which includes their family members, wives, kids, whatever, and find assistance, support and resources for them. I don't mind doing the actual work. I don't mind spending hours, staying up late, working on weekends, to bring something that will be beneficial to our student population. That’s something that the military did train us to be, to make us a band of brothers and sisters and look out for one another.

How did you end up at USF’s Sarasota-Manatee campus?

Moreira: I got out of the military, and I left California in August 2015. And I came straight over here. We wanted our son to be close to family in Sarasota. The other reason why we came over here was because I was looking for universities and I saw that University of South Florida was one of the top ranked schools for military-connected students and for the student veteran. I later learned there was a campus in Sarasota, so that’s where I enrolled and eventually graduated from.

Moreira: I did. Todd Hughes was in the role I am in now. I was able to relate to how he was taking care of the students, even though I was a student, how he was there for them, trying to find them the assistance, support and resources they needed. I'm like, 'OK, I like this, I'm enjoying this. And I'm able to help out my brothers and sisters, this is great.’ And while I was a student, I worked for him as a VA work study student, so that allowed me to learn a lot more, allowed me to do programming and expand and grow while he was here. When he left, I was going for my master’s, and he asked me to apply for the job. He said I would be a great fit, and I was like, sure, why not do it.

What makes your job rewarding?

Moreira: What makes it rewarding is that knowing that I can help someone accomplish a goal and be successful. A lot of times, veterans leave the service and find themselves afraid of civilian life. I ask them and tell them, ‘What are you scared about? Look at everything that you accomplished. You should not be somebody that should be walking around scared. You used to be somebody; you should be walking proud. You have a lot to give and to provide. You know, the same way you walked when you had the uniform on and were proud. Why are you doubting yourself?’  They say, ‘Well, you know, I've never been a civilian. I don't know what to expect.’ And I say, ‘Well, that’s simple, the same respect that you give is what is going to be provided to you, but don't be scared.’

If you are talking with someone who is about to leave the military and they want to go to college, what do you say to convince them that USF is for them?

Moreira: I definitely tell them this is best the place to come. We support our military connected students. The Office of Veteran Success, we are here to help you. We are not perfect, but we will go above and beyond to take care of those in need. Especially on the Sarasota-Manatee campus, where we are smaller, a lot of times once you engage it becomes like a family. We are taking care of students before they come, while they are here and after they leave.

Boundless Bulls is a collection of stories about what truly makes USF great — the people. It is a focus on our community footprint, our impact and the trajectory of where we can go together. To nominate a member of the USF Sarasota-Manatee campus community for Boundless Bulls, please fill out the submission form.