New USF Sarasota-Manatee campus student Gov. Riffatul Islam brings a unique a perspective to his educational and career goals. Born in Bangladesh and raised in Bradenton since he was two years old, Islam witnessed extreme poverty during visits to his native country. 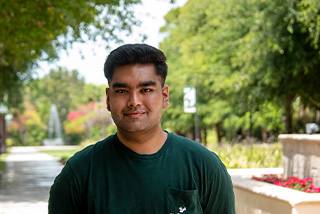 “The poverty in Bangladesh is incredible to see,” says the 20-year-old biology major, who will enter his senior year in the fall. “It’s one of the reasons I wanted to become a physician, so I can make a difference. I want to be able to travel to places where I can help people.”

That experience of witnessing intense poverty not only informed his choice of major, but also convinced him to reach out to others whenever possible, including last spring when he and Jovanna Arce were serving on the campus council and approached to run for governor and lieutenant governor.

Islam was lukewarm to the idea initially, but reconsidered after seeing the position as an opportunity to help the campus fully reopen after most courses were shifted to online learning due to COVID-19 more than a year ago.

“In a way, being student governor is almost like being a physician,” he said. “Both jobs are about outreach.”

Islam has a history of reaching out and being involved. In addition to serving as campus governor for the Student Government Association, he is a USF Ambassador and a freshman/transfer student orientation coordinator. He’s also a member the Order of the Golden Brahman and Phi Delta Epsilon.

For now, he says, the campus’ reopening is Job One. Among other plans, he and Arce want to team up with the Office of Student Engagement to encourage a robust student club membership drive this fall and a return throughout the year of popular on-campus events, including Week of Welcome, the annual spring carnival, movie nights, food truck festivals and other activities.

“This isn’t just about having fun,” he said. “Our main goal is basically to bring back what it means to be here in person, what it means to be a true USF Bull. We know the past year has been hectic, not just for me, but for all of us, especially with virtual classes. But we have an opportunity now to change all of that.”

Islam admits he faces a difficult task, but he’s used to challenges. Growing up and adapting to a new culture and language taught him to embrace new goals. His religion and strong family bonds have helped as well, he says.

In particular, a new Honors College class this past spring posed a unique challenge. The class, about art and health, was outside his comfort zone.

“I’m used to science classes, so this was a real departure for me,” says Islam. “But I knew it was something that would challenge my way of thinking.”

The class involved a program by the John and Mable Ringling Museum of Art in Sarasota that connects people with Alzheimer’s disease and other disabilities to art from the Ringling collection. The program’s intent is to stimulate thought and discussion among the participants.

With his professor’s blessing, Islam took a slightly different approach: Working with a small team of classmates, he developed a video using art and relaxation techniques as part of an outreach to overworked doctors and nurses treating COVID-19 patients.

The video was very well received and was accepted by organizers of an academic conference overseen by Johns Hopkins University. Islam delivered the team’s poster presentation and walked attendees through the video. Only a handful of undergraduate students nationwide were invited to address the conference.

“I was very proud, obviously, and this is a great addition to my CV, but more important than that was the fact that this helped me to take a step forward in learning more about mental health as a whole and creating something that has the potential to help doctors and nurses. Being able to do that, that’s what is most important to me.”

Jovanna Arce, a rising senior at the USF Sarasota-Manatee campus, has had a long love affair with medicine. As a child, she couldn’t stop watching medical dramas on TV. As she grew older, that fascination turned to more serious viewing: watching surgeries and medical exams on YouTube. 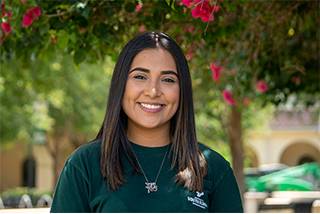 “I just couldn’t get enough of it,” says Arce, a biology major and aspiring physician. “The idea of helping people appealed to me very strongly as a child, and still does. To be able to help heal people and make a difference in their lives, I don’t think there’s anything else I would rather do.”

That desire to impact the lives of others was one reason she ran for lieutenant governor at the Sarasota-Manatee campus alongside fellow biology major and incoming campus Gov. Riffatul Islam.

The two served on the campus council last spring when they were approached about running. Like Islam, she was hesitant at first, but had a change of heart after considering how they could help after courses were shifted to online learning for more than a year due to COVID-19.

Their main goal now: to help the campus return to normalcy, including a return of popular on-campus events and club activities.

Additionally, Arce wants to see the USF Bull Bucks program come to Sarasota-Manatee. Like a bank card, Bull Bucks allows students to make purchases, including for books and campus café items, while providing an alternative to cash and other payment forms.

“I think there are some students who may not qualify for a credit card or other forms of payment who could really benefit from this,” Arce said. “We’ve also talked about trying to have an Amazon locker here, so students can order things and pick them up on the campus.

“But our main goal now is to help students get back into the swing of things, especially after COVID and having everything virtual,” she said. “We want students to come back and feel comfortable on campus and get back to doing things together again.”

The daughter of immigrants, Arce said she has always embraced education as a pathway to success. That goes for USF, as well, where she has carved out a stellar educational career even as she works multiple jobs, including at a research facility in Sarasota.

“I’ve always been a bit of an over-achiever,” she said. “I think that was instilled in me by my parents who have always worked hard. Now it’s my turn to work hard, and hopefully in the future I’ll be able to help others.”