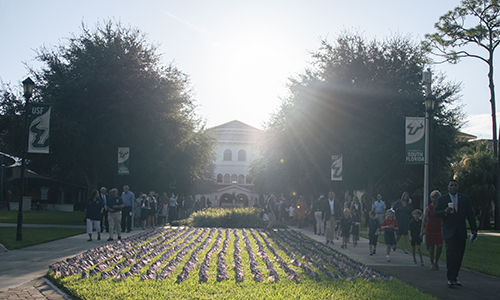 The University of South Florida marked the 20th anniversary of the Sept. 11 terrorist attacks with a special ceremony at the Sarasota-Manatee campus on Friday. More than 150 attended the 90-minute event, which featured Regional Chancellor Karen A. Holbrook and New York City firefighter Garrett Lindgren, who both shared their experiences during Sept. 11, 2001. 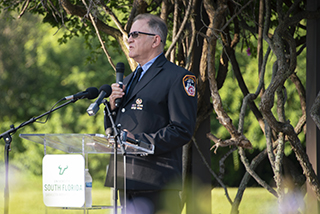 Lindgren was assigned to Rescue Company 3 in the Bronx when the call came in about the terrorist attacks at the World Trade Center. Arriving at the scene, he was stunned by the breadth of destruction: acres of debris, thick clouds of dust and smoke, police cars and other vehicles destroyed by rubble.

“To me, it was like what war looked like,” he said. “We only found a few live victims that entire first day,” he said. “The hardest part was being so close, but not being able to get them out in time.”

Most of the firefighters from Lindgren’s earlier shift had been killed, or were missing, and at one point, he, too, was counted among the missing. Worried what his wife was thinking, he called home after finally being able to get cell service.

“My wife saw my caller ID and her immediate response, in her mind, was that someone found my phone,” he said. “That’s how sure she was that I was gone. Then she heard my voice, and after some emotion, we were able to talk a little bit. I was able to then tell her what had happened and who was still missing.”

Lindgren didn’t get back to his firehouse in the Bronx until 1 a.m. For weeks after that, he returned regularly to Ground Zero to comb through rubble. In all, the attacks claimed the lives of 340 firefighters and 72 law enforcement officers. Many more died months and years later from injuries and related illnesses. Most of those in Lindgren’s company had been killed.

Lindgren, who lives in Lakewood Ranch in Manatee County, often recounts his experiences on Sept. 11 to “talk on behalf of the heroes,” he said. He was joined at the ceremony by Regional Chancellor Holbrook, who recounted her reaction to the attacks as well.

“I remember a particularly intense feeling for the need to make eye contact, to greet – and in some way – to reach out to connect with people I passed on the campus of the university where I was at the time, even people I didn’t know, as we were all together in our grief for our nation and for the people who suffered intolerable loss, and we all understood what others were feeling,” she said. “And we turned to one another to begin healing from the unprecedented and shared trauma of our homeland.”

The ceremony began at 8:15 a.m. with a flag-raising event, then shifted to the campus courtyard. Three days earlier, students, staff, faculty and community members planted 2,977 tiny flags in the courtyard lawn to honor each of the victims.

“This year is special because it marks 20 years since the attacks that took place on September 11th, 2001,” said Carlos Moreira, director of campus engagement for veteran success and alumni affairs. “In a time of grief, the American people came together. They offered strangers and their neighbors a helping hand and reaffirmed to one another that we were united as one, as Americans. For this reason, we will never forget the victims, their families and the heroes.”

The annual remembrance has become a tradition at the USF Sarasota-Manatee campus. Past speakers have included David Kotok, chief investment officer of Cumberland Advisors, and Dan Hoffe, executive vice president of Capstan Financial Consulting Group. Both were inside the center’s south tower when American Airlines Flight 11 crashed into the north tower. Hoffe was still inside when a second plane, United Airlines Flight 175, struck the building. Both said the tragedy left an indelible impression. 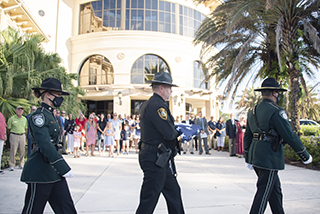 Addressing the crowd, Moreira concluded the ceremony, saying: “As we remember 9/11, I challenge all of you to remember 9/12. Why 9/12? Because 9/12 was when the nation came together, 9/12 was when we all called ourselves Americans regardless of our race or other differences. We were all Americans, and we were there to take care of each other.”

“Twenty years ago, our nation came together, united by tragedy – to respond, to recover and to reflect,” she said. “For this year’s National Day of Service and Remembrance, I invite you to pause and consider how we can work together as One USF to make the world a better place for all.”

For more of President’ Law’s video message, visit here. To learn more about initiatives across USF to honor the victims and heroes of the Sept. 11 attacks, visit this link, and to watch a recap video of the 9/11 remembrance video visit here.

Consistently ranked as among the nation’s top veteran-friendly schools, USF offers a number of unique programs and resources to benefit student veterans. Visit the USF Office of Veteran Success to learn more about scholarships, military benefits and other services. At the USF Sarasota-Manatee campus, student veterans can visit the Military and Veterans Success Center.

For more about the USF Sarasota-Manatee campus, visit sarasotamanatee.usf.edu.