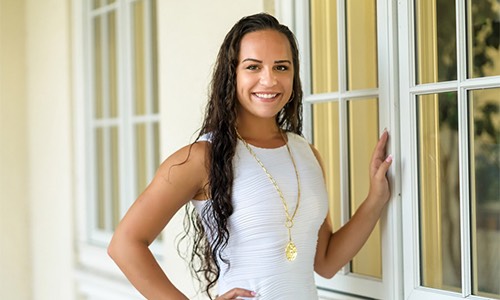 The 2020 graduate and Sarasota resident recently completed an internship at a film production company and now is mulling a trip westward for an extended role at the same or a related company.

“I really enjoyed the experience and it’s something I’m thinking about long term, but I want to make sure it’s the right job and in my field,” said Oriente, who graduated in August with a marketing degree after taking classes at the Sarasota-Manatee campus.

Oriente said she couldn’t believe her luck last fall when she received a call from Jay Riley, director of business outreach and community engagement at the campus, saying a film production company was seeking students to promote its release of “Children of the Corn” at theaters in Sarasota.

The company, COTC Productions, initially planned to release the movie in New York and Los Angeles, but theaters there were closed due to COVID-19. Florida re-opened its theaters in June, and because Executive Producer Keri Nakamoto lives in Osprey, a decision was made to screen the film in Sarasota and Tampa. If all went well, the producers would take the film to Atlanta and other cities.

After a 90-minute video interview, Oriente was offered the position, which she jumped at, viewing it more as an internship or learning experience than a job. “It was really interesting, and Keri has so much knowledge, not just about films but about marketing in general.”

Oriente coordinated with theater managers on Siesta Key, in Burns Court in Sarasota and Hyde Park in Tampa to arrange the screenings and ensure that social distancing, mask wearing and other precautions for staff and audiences were followed. Attendees completed health questionnaires, and a half-dozen USF students and alums pitched in, as well, to help with the precautions.

The screenings ran from October to early December, drawing 30 to 40 people each, with no one contracting the virus, said Oriente, who finished working with COTC Productions a few weeks ago. She said she was grateful for the experience, collaborating not only with Nakamoto but producer Lucas Foster, who oversaw the shoot in New South Wales, Australia, and previously worked on 2019’s Oscar-winning “Ford v Ferrari,” “Crimson Tide” (1995), “Law Abiding Citizen” (2009) and “Mr. and Mrs. Smith” (2005). He also has a film, “Morbius,” a horror-fantasy flick, due out in March.

The best part of the experience, Oriente said, was creating a 40-page report about COVID’s impact on entertainment, reviewing theater shutdowns state by state, revenue projections and how film studios coped with the economic fallout.

Looking ahead, she said she’s hoping for a long-term opportunity with Nakamoto, possibly as a production assistant, or at a company locally. However, no matter where she lands, she said she wants to make the most of her marketing degree.

“It’s a big step and it would mean having to move, so I want to make sure it’s the right decision and the right fit,” Oriente said.

Nakamoto offered high praise for the USF grad: “It was a pleasure working with Kristen. She is reliable, positive and competent – an asset to any team.“

The irony of the experience is that prior to working for Nakamoto, Oriente never considered herself much of a movie buff.

“I almost never went to the movies,” she said. “Even my friends and family joked about it. I was the last person they would expect to see in this job, but I think it was really interesting and challenging. It was a great experience.”