USF leaders cut the ribbon on a new study center.

The center, on the ground floor of the campus’ FCCI Rotunda, debuted on Oct. 20 with a ribbon cutting attended by USF interim President Rhea Law, USF Sarasota-Manatee campus Regional Chancellor Karen Holbrook and Campus Board members, among others.

“This is a proud moment,” Law told the group. “This project is the culmination of a lot of work, and I’m so proud of Karen and the leadership of this campus who identified a need and worked hard to resolve it, and I am proud to be here on this wonderful campus at this moment.” 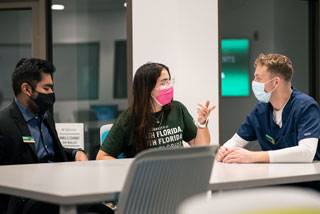 Faculty, staff and students crowded around the center’s entrance as Law and campus leaders cut the green ribbon and opened the doors. Holbrook said the project came in response to students who said the campus lacked study space, including areas for group collaboration.

“They were right, there wasn’t enough space,” Holbrook said. “We put a lot of thought into how we could repurpose part of the campus to help solve some of these problems. This project allowed us to design a multifunctional area for students to study, learn and collaborate.”

The center, which took about six months to complete, is comprised of a large central lounge flanked by five rooms, including one outfitted for group presentations. It includes tables, chairs, desktop computers and video monitors. Glass walls allow for light and make the space visible to visitors in the rotunda.

“I think it’s an amazing space,” campus Gov. Riffat Islam said. “It’s something that students have wanted for a long time, and I’m glad to see that campus leadership listened and took this step to create this space. I’m sure it will be well-received by the students.”

The center replaces the former Student Services lounge, where students checked in and waited to speak with academic advisors. That function has been replaced by the rotunda’s welcome desk.

The project occurred amidst a range of campus upgrades over the past 18 months to create a more engaging experience for students returning to classes in the fall.

Among other changes, crews painted the building, added landscaping, remodeled the second-floor “mini-rotunda” to create more study space and upgraded the Selby Auditorium, removing carpeting and wood paneling. In addition, the stairwells were revamped to allow more light.

“We are thrilled with the improvements made to the campus over the past year,” Holbrook said. “We have a big and bold future ahead of us as we begin planning even more exciting expansions and building projects on the Sarasota-Manatee campus.”