Police vehicles surrounded the north side of the University of South Florida’s Sarasota-Manatee campus, teams of officers assembled, negotiators were in place and a tactical team entered the building to secure the hostages and suspect. Although this was a training exercise, every bit of this situation looked like an active police situation. 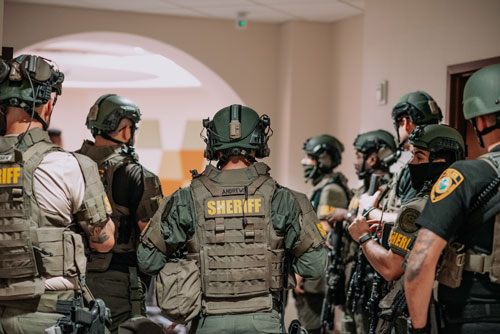 USF welcomed the Manatee County Sheriff’s Office (MSO) to its Sarasota-Manatee campus on December 16 to hold a joint training exercise with their Crisis Negotiation and Special Weapons and Tactics (SWAT) teams.

The collaboration with USF’s Sarasota-Manatee campus allowed the MSO to conduct a realistic hostage training experience.

USF’s Sarasota-Manatee campus assistant director of safety and security David Bjelke presented the idea to campus leadership this past spring.

“It’s beneficial for both USF and the MSO to hold this training on our campus,” Bjelke said. “If we were ever in an active shooter situation, these officers will already know the campus and it will expedite their efforts enter the building and assist people.”

Bjelke is a retired Tampa Police officer and crisis negotiation team member. He said these training exercises are so important for officers because every situation is different.

The training exercise began at 10 a.m. with a call to MSO that there was an armed hostage situation on the USF Sarasota-Manatee campus. MSO Deputy Lawrence Hickman acted as the hostage taker, with MSO Deputy Ashley de Lima as a hostage and USF student Caitlin Dixon, daughter of MSO Training Coordinator and Crisis Negotiation Team Commander Carrie Renninger, as the other second hostage.

Responding to the call was the MSO Crisis Negotiation Team, SWAT Team and law enforcement officers.

“It’s been a couple years since we have been able to hold a training with both of our teams together and at a real business,” said Renninger. “Having the opportunity to do a live exercise on a university campus with the SWAT team provides many learning opportunities and experiences for everyone.”

Renninger shared that although the Crisis Negotiation and SWAT teams hold many trainings throughout the year, it’s not often that they can join together and participate at a real place of business, let alone a college campus.

Although classes had ended for the year, some USF faculty and staff were working on site. Multiple communications and notices were shared that the second floor of the A and B wing of the campus would be off limits. Prior to the hostage exercise, the MSO SWAT team and USF campus security team secured the area, checking every room and blocking off the space so there wouldn’t be any conflicts.

As the training exercise commenced the SWAT team took action and established a safety perimeter in and around the north side of the main campus building as the Crisis Negotiation Team was setting up in their communications bus. There were approximately 30 SWAT Team members, 15 crisis negotiators and multiple law enforcement leaders participating. 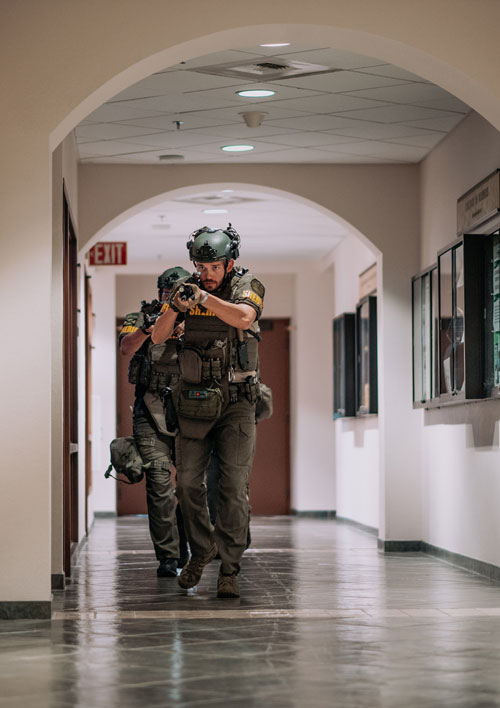 Dressed in full tactical gear with unloaded weapons, The SWAT team proceeded into the building. They kept their voices low, used hand signals and moved definitively as if it was a real hostage situation. They made their way through the campus, clearing hallways, classrooms and offices to remove any civilians and locate the hostages and suspect.

Simultaneously, the negotiation team was in contact with the hostage taker. They learned he was armed and had two hostages with him.

The SWAT team was now in place at each door of the classroom where the hostage situation was unfolding. The negotiators were able to arrange for the release of one of the hostages in exchange for food.

As the negotiations continued, the assailant was losing patience and he threatened to take the life of the hostage. Although there is a primary negotiator communicating with the hostage taker, many are listening. No time was wasted when the SWAT team was ordered to advance.

“After he made the threat, the SWAT team was in the room in what felt like 30 seconds,” exclaimed Dixon, who played the hostage. “At that point the hostage taker surrendered and got to the floor. The officers escorted me out and at certain points there were different people guiding me until I got to the police bus where I was questioned. They treated each moment as if it was real. It was definitely intense!”

The consensus between the units is that the training was a success.

“The primary objective is to protect the civilians and hostages,” said Lieutenant Louis Licata, who has served 15 years on the MSO SWAT Team. “We want to resolve the situation peacefully and with limited force and we were able to do that today.”

In addition to the hostage training exercise, the MSO SWAT team remained on campus to work with the University Campus Police Department (CPD) and the Sarasota-Manatee campus safety and security team. They reviewed and conducted training scenarios throughout the campus. 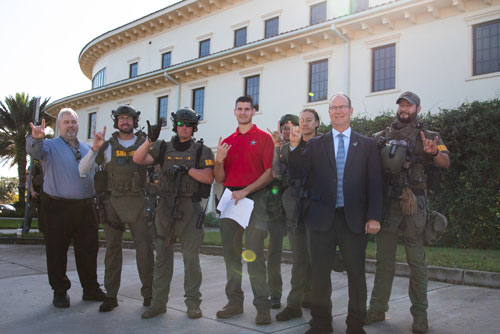 USF Sarasota-Manatee campus Vice Chancellor of Academic Affairs and Student Success Brett Kemker shared that USF is committed to the safety and security of everyone on campus. “Opening our campus for this training scenario and strengthening the relationships between our campus police, security team and the Manatee County Sheriff’s Office is a natural extension of our mission to educate and serve the people of Florida.”

SWAT Commander Seargent Dino Murges was happy with how the day unfolded, saying “this exercise took us out of our training facility and placed us in an unknown environment, making the exercise much more realistic. We appreciate USF’s Sarasota-Manatee campus for providing us with this opportunity.” 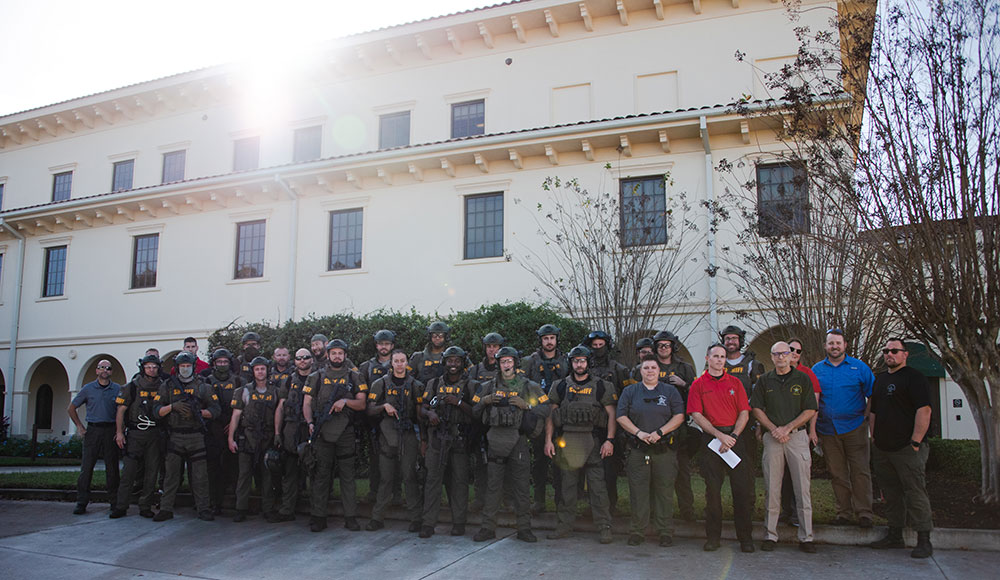