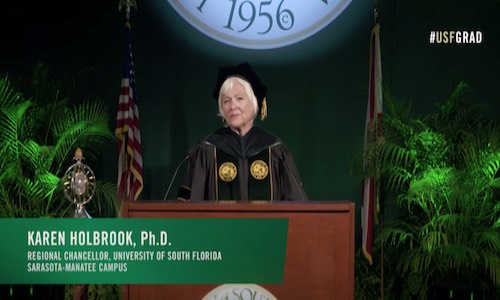 For the first time in its history, the University of South Florida Sarasota-Manatee campus held a virtual commencement ceremony on Saturday, conferring 280 degrees to graduates who were unable to participate in a traditional in-person ceremony due to the coronavirus pandemic.

USF President Steven Currall presided over the ceremony, which was available online at the USF commencement website beginning at 10 a.m. He also presided over virtual graduation ceremonies for campuses in Tampa and St. Petersburg. Altogether, the three USF campuses conferred nearly 7,500 degrees.

The virtual ceremony featured elements of traditional in-person ceremonies, including remarks from Currall and the regional chancellor of each campus, comments from each campus’ student body president, and recognition of the Outstanding Graduate Award winners and graduates who earned a 4.0 GPA. Afterward, degrees were conferred by displaying the names of each graduate on screen instead of graduates walking across a stage one at a time.

“This ceremony not only recognizes your successes and accomplishments, but it also symbolizes your personal evolution,” USF Sarasota-Manatee Regional Chancellor Karen A. Holbrook told graduates during the ceremony. “You are a diverse student body, reflecting a broad range of ages with distinct perspectives on life, culture, gender, race and faith. All of you are USF Bulls, but each of you is a unique individual who is prepared to make a significant impact on your own future and our collective future as a society.”

In addition to remarks from Holbrook, Currall addressed graduates, telling them that because of the challenges they faced over the past few months, and the way they handled them, their graduation had become more meaningful.

“USF graduates aren’t afraid to face the unknown, and that’s exactly what you have done — with optimism and courage,” Currall said. “Your entire university experience changed, moving from in-person to online, but you found ways to stay connected to your professors and your classmates. You continued to innovate and find new ways of gaining knowledge, no matter what you studied or where you studied it, you persevered.”

“For each of you, remember, today is just the beginning,” Currall said. “It is, quite literally, the ‘commencement’ of the rest of your lives. Take what you have learned and use it as a springboard toward a life of further scholarship.”

Outgoing Student Government Association (SGA) President Isabelle Starner spoke on behalf of the class of 2020, saying, “I am thankful to have been given the opportunity to represent you as your student body president.

Kayla Collins, who served as SGA vice-president this past year, was chosen Outstanding Graduate. A criminology major, Collins was the first student enrolled in the Criminology 4+1 program, which leads to both a bachelor’s and master’s degree in five years. She will earn a master’s in criminal justice administration next spring.

Shortly before the ceremony, Collins reflected on her time at USF Sarasota-Manatee, saying she appreciated the small class sizes, family-like atmosphere and opportunity afforded to her to grow, not just as a student but as an individual.

“The culture here at USF Sarasota-Manatee is founded on familiarity and kindness, and everyone here genuinely cares about your success and seeks out your strengths,” Collins said.

The Outstanding Graduate Award is presented each semester by the USF Alumni Association and recognizes the graduating senior who embodies leadership, school spirit, community service, character and scholarship.

In addition to serving as student body vice president, Collins was a community leader coordinator, a lead campus experience guide, a USF ambassador, secretary for the Adventure Club and vice president of the Yoga Club.

She was a standout in the classroom, as well, serving as a member of the National Society of Collegiate Scholars and team leader in Jessica Grosholz’s Prisoner Reentry and Recidivism course.

“Looking back on my time at USF Sarasota-Manatee, I think what I loved most was the family that I made there. This truly is a family,” she said. “And as I look ahead, what I see really is the beginning of many new opportunities as well as a stepping stone to continue my education.”

Fruehauf worked as a library staff assistant in the Information Commons, secretary of students in Student Government and was executive producer of last fall’s TEDxUSFSM event, in addition to many other responsibilities.

He also served as an orientation community leader coordinator, president of Box Office Bulls and past vice president of Climb-A-Bull.

Fruehauf graduated with a Bachelor of Science degree in information technology from the College of Business. He intends to work as a para-librarian while pursuing a master’s degree in library and information science at USF in Tampa.

“This milestone marks the end of a long and exciting journey, one that I will forever cherish,” he said of his graduation. “It is a gateway to the next chapter of my life, and I can’t wait to see what’s ahead for me. I’m honored to have been surrounded by talented and kind people, who’ve served as role models and friends to me throughout my years here.”

Also awarded were Edie Banner, PhD, an organic chemistry instructor who was chosen Outstanding Professor by the student body; and two students that achieved a perfect 4.0 GPA, Leena Bouhamid and Brittiny Haralson, who were recognized as King O’Neal Scholars.