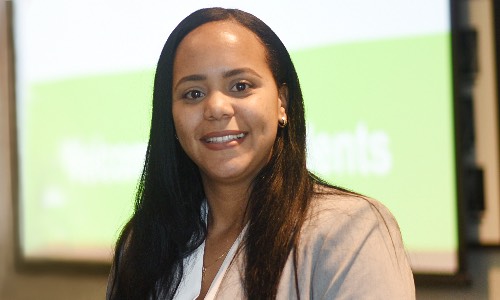 Isabel Mercedes Marine Fernandez credits her experience as an immigrant for shaping her educational goals and long-term ambition to work at U.S. Customs and Border Protection (CBP).

A division of Homeland Security, CBP is responsible for protecting the nation’s borders while facilitating international travel and trade. Fernandez, who will graduate in the spring with a bachelor’s degree in interdisciplinary social sciences from the USF Sarasota-Manatee campus, said she was impressed by the courtesy immigration officials gave her after moving from the Dominican Republic in 2007.

“After my experience immigrating to the United States I decided I wanted to make a difference in my community,” Fernandez said, adding that she always enjoyed sharing her immigration experience to explain the citizenship process.

Enrolling at USF Sarasota-Manatee in 2017, Fernandez knew she wanted to pursue a career built on that experience. Her goals came into sharper focus last fall after meeting Luke Bencie, a former intelligence officer and the author of “The CARVER Target Analysis and Vulnerability Assessment Methodology.” 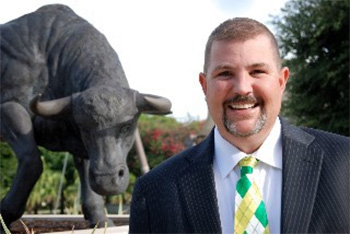 At the request of Jay Riley, director of business outreach and engagement at USF Sarasota-Manatee, Bencie met with Fernandez to talk about career options at the federal government.

Bencie operates Security Management International (SMI), a high-level security and intelligence firm outside Washington, D.C. Impressed by Fernandez, he invited her to a weeklong SMI training session for military and government employees.

The training focuses on CARVER (Criticality, Accessibility, Recoverability, Vulnerability, Effect and Recognizability), a process for analyzing security threats and vulnerabilities.

Fernandez said the CARVER experience was unforgettable. But more importantly, it gave her reassurance to become a U.S. Customs and Border Protection agent.

“Not only did I learn about CARVER, a process used by security agents across the country, I realized that I made the right decision about applying to CBP,” Fernandez said. “I know that I want to protect and serve this great nation, especially after everything it’s done for me.”

The exhaustive vetting has taken nearly a year, including background checks, two interviews, a general knowledge test and physical and psychological exams, but now Fernandez is nearly finished.

The last steps will happen after she graduates: a polygraph and drug test and then a three-month academy to undergo physical training and learn about immigration law.

She considers it a privilege to work at CBP.

“I am so grateful to this country for all the benefits and opportunities it’s given to me,” Fernandez said. “I can hardly wait to get started at the academy and learn the tools and strategies to guide my efforts to make a positive impact in my community.”