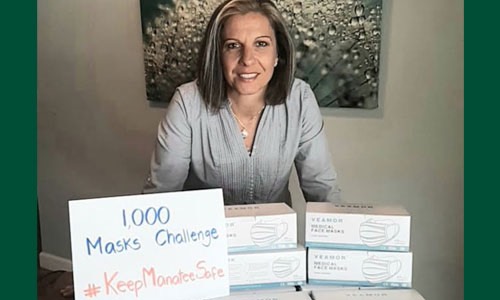 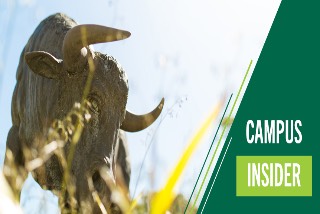 Jessica Pérez Maqueda, the USF Sarasota-Manatee campus student who launched a mask-collection drive in April, has delivered 1,000 medical masks to Manatee Memorial Hospital. Pérez, along with two other donors, made the delivery on Friday, May 15.

Pérez, a School of Education student, said she was overwhelmed by the generosity of friends and family who pitched in to help reach her 1,000-mask goal.

“This is only possible because these donors decided to act to make a difference in the lives of others,” Pérez said. “This experience showed me what can happen when people come together.”

Pérez was greeted at the Bradenton hospital by three nurses, Manatee Memorial CEO Kevin DiLallo, and Marketing and Communications Director Betty Chambliss. Joining them were three mask donors – Geraldine Bush, Elizabeth Sierra and Carol Davis – but many others aided in the drive as well.

Pérez said she started the collection last month after talking with a friend and nurse at the hospital who spoke about the need by patients, staff and visitors for high-quality medical masks. According to the Centers for Disease Control and Prevention, health care professionals account for 20 percent of confirmed coronavirus cases.

Additionally, Pérez was moved by the virus’ devastation in her native Spain. She grew up in La Línea de la Concepción, a city of about 65,000 across from Gibraltar on the southeastern coast, and she still has many family members in the area.

The pandemic hit Spain especially hard, with more than 27,000 deaths, and while Pérez’s family has managed to avoid the virus, they all know friends and coworkers impacted by it.

After working at an international school and teaching English, she emigrated to Bradenton in 2005, where she raised her two sons, taught English as a second language in Manatee County public schools and worked at a child abuse prevention center.

In 2018, she enrolled at the USF Sarasota-Manatee campus to pursue a degree in elementary education. She’s on track to graduate next spring. After that, she said she might pursue a master’s degree in education. Her husband teaches history at the State College of Florida collegiate program for high school students.

“For me, this initiative shows that ‘where there’s a will there’s a way,’ and the donations to the 1,000 Masks Challenge are proof of that,” Pérez said. “Thank you to all the generous donors who had the will to make this happen.”

The USF Sarasota-Manatee campus’ upcoming consolidation with campuses in St. Petersburg and Tampa is unlikely to produce significant changes to the campus’ Student Government, according to student leaders involved in the transition.

As USF merges into one university on July 1, student leaders say the biggest change to Student Government will involve the Student Body “president” and “vice president” titles, which change to “governor” and “lieutenant governor,” and the student “Senate,” which becomes known as the campus “Council.” 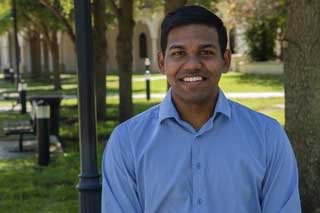 Claire Mitchell and Gustavo Spangher, students at USF in Tampa, will serve as the first university-wide student body president and vice president, respectively, on the “federal level,” working with governors from each campus.

“It's really just a title change,” incoming Sarasota-Manatee campus Gov. Josh Ghansiam said of the restructuring. “The job description and the duties will still be the same.”

The new student leaders said they have big shoes to fill and a busy agenda for the upcoming academic year. High on their list is a new student center to replace the existing Student Commons.

The $15 million project, which would house Student Government, recreation and study areas and other spaces, has long been considered part of the campus’ proposed expansion. Among the other proposals are a 75,000-square-foot Integrated Science and Technology Complex on the campus’ south side and residence halls toward the west.

“I’d at least like to see ground broken this year,” said Ghansiam, adding that the center has long been talked about but hasn’t been funded.

The two said they plan to approach campus administrators to try to advance the project.

“We've got the blueprints and the location picked out. We're just waiting for an update,” Escobar said.

Also, the two said they plan to talk with the College of Hospitality & Tourism Leadership about adding a mobile ordering system to the campus café for fast pickup between classes.

“Sometimes, the café gets crowded and it’s hard to get a coffee or sandwich and make it to the next class on time,” Ghansiam said.

Among other options, they plan to:

“I know it’s a lot to do in one year, but we’re both super excited to get to work and represent the Sarasota-Manatee campus,” Ghansiam said. 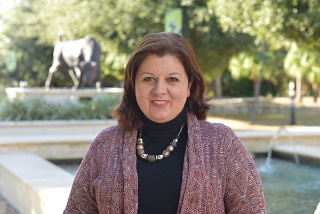 successfully defended her dissertation this spring and received her Doctor of Education degree, which was conferred on May 9. Malkic’s major concentration is educational program development with an emphasis on innovation.

“Graduating with a doctoral degree is certainly my most rewarding academic accomplishment to date,” Malkic said. “As a working professional with a busy family life, I had to juggle a number of competing priorities over the past six years, and maintaining balance was challenging at times. Nevertheless, my motivation was unwavering as my degree allows me to meld my extensive practical experience with a theoretical background of educational program development.

“I am eager to use my expertise in the development of innovative, effective solutions to real-world problems in education,” she said.

Malkic’s research interest is in experiential education, particularly in the area of community and service-learning opportunities that have a global emphasis. She also serves as president of the Mid-Florida Chapter of the Fulbright Associationand remains passionate about academic and cultural exchange opportunities for USF students and faculty.

“This group works so well together, and to win this award two years in a row is very impressive,” said chapter advisor Jenna Luque, PhD, an instructor in the Communication Sciences and Disorders Department at the College of Science & Mathematics. “What’s more impressive is they achieved this honor with 100 percent of the members working remotely.”

Club President Amanda Driscoll credited the recognition to the consistent support of Luque and the club’s executive board members.

“I am truly humbled and honored to have worked alongside a group of individuals who are so hardworking and dedicated to improving the lives of those affected by speech and language disorders,” she said.

NSSLHA recognizes chapters for supporting its mission to inspire, empower and support students in communication sciences and disorders (CSD) programs.

Among other efforts, the chapter created Halloween-themed stickers with fast facts about communication disorders and sold T-shirts to raise funds for NSSLHA and other charities.

The chapter launched in 2013 with the mission to collaborate remotely to raise awareness about CSD, raise funds for national and local charities and provide service learning to its members.

NSSLHA is the only national student organization for pre-professionals studying CSD recognized by the American Speech-Language-Hearing Association. Established in 1972, National NSSLHA is headquartered in Rockville, Maryland, and supports 12,000+ members and 320+ chapters at colleges and universities nationwide.

To contribute to the Faculty and Staff Campaign, which runs through June, please click here.

Among the site’s options is the Support-A-Bull Pantry, which opened March 30 to address food insecurity among students. The pantry is supported by campus donations and Sarasota-based All Faiths Food Bank.

“This is a time when many people are losing their jobs, or at risk of losing their jobs, and they may need extra support to get them through this difficult time,” said Jenni Menon Mariano, PhD, of the School of Education. “It is so critical to support the food pantry and other funds that help our students.”

To make a donation to the pantry or to request items, please click here.