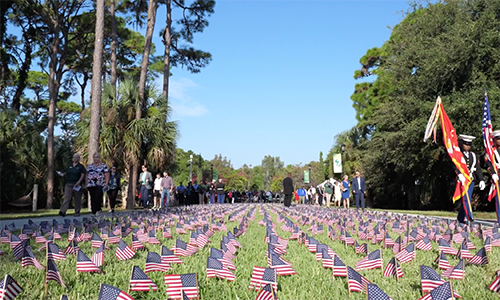 The Office of Veteran Success at the University of South Florida Sarasota-Manatee campus hosts a remembrance ceremony each year to honor and pay tribute to all those affected by the events on Sept. 11, 2001. To promote a healthy and safe campus during this pandemic, a video was created as a replacement for the annual on-campus ceremony.

The remembrance video features an address by USF President Steven Currall, footage of past remembrance ceremonies and a special commemorative poem by USF alumnus and 9/11 survivor Dan Hoffe.

Hoffe, who earned an MBA at USF in 2005 and serves as executive vice president of Capstan Financial Consulting Group in Sarasota, was inside the World Trade Center when two hijacked passenger jets crashed into the two buildings.

Emerging from the south tower, he turned long enough to see smoke and flames pouring from shattered windows. On the video, Hoffe plays a recording of an anxious call to his wife to assure her he wasn’t hurt, and he recites one of the many poems he has written about the event and its impact on him and others.

In addition to President Currall, Hoffe is joined on the video by campus Veteran Services Coordinator Carlos Moreira and Regional Chancellor Karen A. Holbrook, who offer their thoughts about the sacrifices made that day and the response of millions of Americans to pull together as one.

The video can be viewed here, http://sarasotamanatee.usf.edu/911.

The University of South Florida recognizes the importance of celebrating the distinctive cultures, heritages and ethnicities that make up its diverse community. To mark Hispanic Heritage Month, Sept. 15 to Oct. 15, the Sarasota-Manatee campus will host a series of unique events, including an online discussion with noted journalist and media personality Mercedes Soler.

“The Hispanic heritage of people who come to this campus, whether as students, staff or faculty, represents a melting pot of cultures, with people from North, Central and South America and the Caribbean,” said Carlos Moreira, an Ecuadorian native and assistant advisor to the campus’ Latin American Student Association (LASA). “But no matter where we all come from we all celebrate that common bond of being Hispanic.”

Avila, a classically trained chef known around campus as “Chef Rov,” is the mastermind behind the Campus Café’s popular soups, salads and made-to-order entrées. His cooking program will consist of an ingredient preparation segment, where he demonstrates chopping skills and reveals his menu and ingredients, and a cooking segment where he shows how to prepare the cuisine he has planned.

Chef Rov hasn’t revealed his menu yet, but he is expected to prepare several Latin American-influenced dishes. Avila was introduced to cooking by his mother, grandmother and aunt as they prepared food in their home in Tegucigalpa, Honduras’ capital city.

“Chef Rov is a creative and masterful chef, and he’s very popular with students and everyone else on campus,” Moreira said. “We’re all looking forward to see what he has planned.”

Also scheduled for the month is a financial-advice session hosted by Moreira, who holds finance and MBA degrees, both from USF, and an inspirational talk by Soler, who, with her husband, Tomas Martinez, owns several Spanish-language radio stations. Their company, Solmart Media, is based in Sarasota.

Moreira’s classes are set for Oct. 14-16. Soler is tentatively scheduled to address the campus on Oct. 29.

An award winning journalist, Soler anchored a daily live, news, issues and women’s show for CNN Español from 2010 through 2016. Before that, she spent two decades at Univision News as an international investigative correspondent. She co-authored a book, “Dish & Tell: Life, Love and Secrets” (Harper-Collins, 2005), with a group of girlfriends. The book was adapted for the stage as a musical. She has been a columnist for El Nuevo Herald and she taught journalism in Spanish through the University of Miami.

All of the virtual sessions will be open to students, staff and faculty across USF’s three campuses, as well as the public.

Hispanic Heritage Month was established nationally to mark the independence days of Costa Rica, El Salvador, Guatemala, Honduras and Nicaragua (all on Sept. 15) as well as Mexico (Sept. 16), Chile (Sept. 18) and Belize (Sept. 21).

According to the National Hispanic Heritage Month website, the month-long observance “started in 1968 as Hispanic Heritage Week under President Lyndon Johnson and was expanded by President Ronald Reagan in 1988 to cover a 30-day period starting on September 15 and ending on October 15. It was enacted into law on August 17, 1988, on the approval of Public Law 100-402.”

Hawa Allarakhia, a graduate assistant at the Office of Diversity, Equity and Inclusion, said of the holiday, “Students that belong to the Hispanic and Latin American communities bring diverse perspectives to our campus. As a part of our community, Hispanic and Latin American students help us broaden our horizons by teaching us about the music, food, traditions and unique experiences that influence their lives.”

For more about the Office of Diversity, Equity and Inclusion, visit https://www.sarasotamanatee.usf.edu/about/diversity/.

“I think it’s a great way for students to learn about what we do at Student Government and hear what’s on their mind,” said Sarasota-Manatee campus Lt. Gov. Melisa Escobar. “It’s one more way for us to represent students and make sure we’re hearing each and every perspective.”

Board members also share timely topics – such as how students are coping amid COVID-19 – and prepare discussion summaries for Student Government meetings.

Board members are appointed to half-semester terms and free to seek reappointment when their terms expire or explore other Student Government committees. The twice-semester turnover is designed to encourage fresh ideas and greater student participation.

“Hopefully, this serves as a pathway for more students to get involved in Student Government,” said Escobar, a senior biology major.

Sign up for the USF Sarasota-Manatee campus Student Government Advisory Board or learn more.