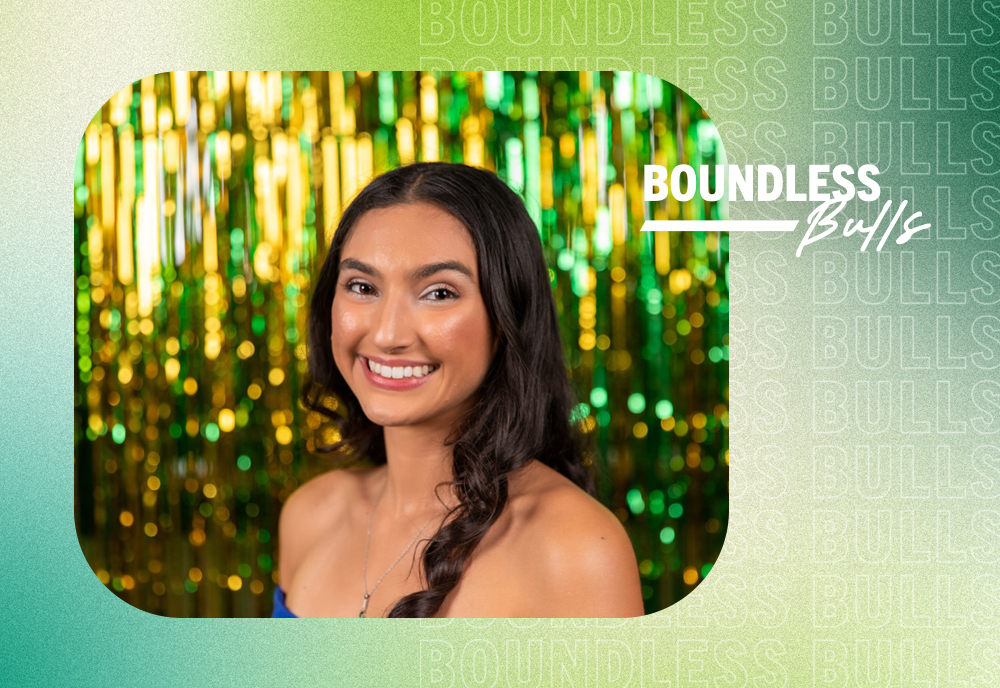 Student Spotlight: Paola-Marie Mannino wants you to get involved

Paola-Marie Mannino, a fourth-year marketing major on the Sarasota-Manatee campus and the voice behind the social media channels for the Office of Student Engagement and the Campus Activities Board, was elected to the Royal Court at the Homecoming Ball during USF Homecoming 2022.

“I almost didn’t do it,” said Mannino, who identifies as an introvert. “It was a whole dilemma.”

“Even though I felt like I knew enough people to where, like, when they saw me, they’d be like ‘Oh, I know her. I’ve seen her around campus. I’ve had a conversation with her.’ or ‘I’ve seen her at an event.’ I was still, like, I don’t know if this is for me,” said Mannino. "Having to fill out the application and talk about yourself in the third-person … It was definitely outside my comfort zone.”

A month after the fact, Mannino describes the experience as “a whirlwind.” During the Homecoming Ball, she was surprised to find herself, along with other members of the Royal Court, sitting at a table with university President Rhea Law.

“It was super cool because we all went around the table introducing ourselves,” Mannino said. “Everyone who ran definitely has their list of accolades and their own ways of becoming an engaged student. It was really, really cool to see the individuality of what an engaged student can be.”

When Mannino first arrived on the Sarasota-Manatee campus in 2019, she quickly got involved in student government at the encouragement of her orientation leader, former student body vice president Kayla Collins.

At Collins’ recommendation, Mannino applied for a position with the marketing and promotions office.

“It was completely empty at that point,” said Mannino. "She was like, ‘You should just go for it. Go for the director role. Build your own office. Hire your own coordinators, and take the lead on everything in that space.’”

Mannino refers to her time as director — her first ever job — as “one of the biggest learning experiences.”

“Going into it at ground zero gave me autonomy that, I don’t think I would have had elsewhere,” said Mannino, who left her position during the pandemic. “So, from the get-go at USF, I was learning how to be flexible and adapt and be open-minded and let my own ideas blossom.”

The experience taught Mannino a valuable lesson in leadership.

“When I went into the role, I didn’t consider myself a leader, really. So, it was an opportunity to explore what being a leader meant to me — and how maybe managing people is different from being a leader,” Mannino said. “When you’re leading a group it’s more about instilling a sense of purpose and the importance of what we’re doing and offering touchpoints of motivation. Rather than just saying, as a manager, ‘This is your task and this is when you need to get it done by.’”

These days, Mannino is leveraging her royal status and newfound leadership skills to promote the Cross College Alliance, a network comprised of five institutions dedicated to higher education and community building in the Sarasota-Manatee area.

Above all else, Mannino hopes to inspire community in her fellow Bulls.

“I’m just a student trying to engage other students,” Mannino said. “These shared experiences are bigger than us. We're doing something outside ourselves.”

Boundless Bulls is a collection of stories about what truly makes USF great — the people. It is a focus on our community footprint, our impact and the trajectory of where we can go together. To nominate a member of the USF Sarasota-Manatee campus community for Boundless Bulls, please fill out the submission form.