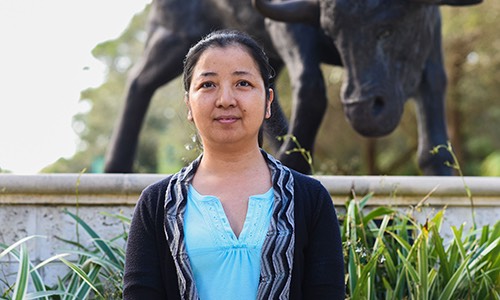 Yan Lu spoke little English when she arrived from China eight years ago with her American-born English-teacher husband. Now she’s poised to graduate this fall with an accounting degree from the USF Sarasota-Manatee campus.

Not only that, Lu is the latest winner of the Manatee Chamber of Commerce’s Bob Bartz Memorial Scholarship.

“I don't think I ever would have been this successful had I remained in China,” said Lu, 47, noting that usually only people in their 20s attend college there.

Lu said she appreciates the opportunities offered to her after moving to the U.S. Her parents were factory workers with limited prospects. But the Bartz scholarship – named for the former Manatee Chamber of Commerce president – is more than icing on the cake as she nears the end of her studies and prepares to graduate in December. The money has come in handy as Lu completes her final classes.

“This is life-changing help,” she said. “In my homeland, and at my age, you would have no chance of going back to college and receiving financial help, so I am very grateful from the bottom of my heart for the belief they have placed in me.”

Lu isn’t wasting the opportunity. While the non-native speaker admits English can sometimes be challenging – including local dialects, colloquialisms and customs – she has maintained a 3.95 grade point average throughout her studies. Still, her uncertainty with English was one reason she was drawn to accounting, which focuses on numbers.

“No matter how good I could perform in certain jobs, I realized I could go only so far because of my English,” Lu said. “But with numbers … as long as my numbers were all right, I would be OK.”

Lu is doing more than OK. She has excelled in accounting and is now finishing an internship at Green & Associates CPA, LLC, in Bradenton. Her next goal after graduation is to pursue her CPA license and build up her career.

“When I came to this country, I realized the only things that did not change in my life were numbers,” Lu said. “The language was an obvious change, but the numbers stayed the same, and now I have a future career because of that. I am so grateful for that fact, and I’m also grateful to be able to pursue a career in accounting in my new home country.”