Josh Ghansiam is getting used to the reaction each time he talks about his plans to pursue medical school and a career as a physician.

After a bit of head scratching, the inevitable question arises, “Don’t you mean veterinarian?”

His mornings start early. Often before dawn. His weekends frequently involve farmer’s markets and installing fence posts and cleaning stalls. And his home in eastern Bradenton, light years past the newly minted suburbs, is surrounded by a menagerie, a large pond and several barns.

At 19, Ghansiam has spent most of his life living around and caring for livestock.

Some are pets. Most are his livelihood, and Saturday mornings often find Ghansiam in downtown St. Petersburg selling eggs at a farmer’s market.

Some of the many sheep at Josh’s farm.

In addition to chickens (layers and broilers), he has horses, cattle, sheep, goats, pigs, geese, ducks and a pitbull-mix that’s his favorite among all of them.

He owns 12 cattle that roam his family’s 10-acre property and keeps another 18 head of cows on 25 acres in Myakka.

It’s hard to tell which animals are commodities and which are pets as Ghansiam rapidly thumbs through a smart phone, pointing out his favorites.

He has 60 sheep. When the lambs are old enough he sells them to other farmers, he explains. He takes his year-old cattle to a stockyard in Arcadia where he haggles over price per pound. He sells the broilers to friends and family when the chickens are plump enough, usually in late spring.

He rides horses and wears a cowboy hat, too.

He learned all that he knows about animal husbandry from his long-haul trucker father, nearby farmers and a veterinarian he befriended after his family left St. Petersburg for a simpler life in the country.

He performs most of the work himself with help from a younger sister, Shavanie. It’s been that way since his first herd of eight sheep arrived nearly 13 years ago.

A young addition to the Ghansiam farm.

Under that wide brim, though, is a mind that wonders not about animals and feed and fences, but about human anatomy and medicine and illness. For as long as he can remember, he’s wanted to become a doctor.

The more animals he acquired, the more curious he became about biology.

Eventually that curiosity found a home as an aspiration, and when he’s not caring for the farm, he’s hitting the books as a biology major at USF Sarasota-Manatee, about 45 minutes west of his farm.

So, when asked about becoming a veterinarian instead of a physician, Ghansiam smiles and replies as he has many times before:

“I always tell people the same thing, it’s something I really enjoy doing, working with animals, but it’s not something I want to spend my entire life pursuing primarily. It’s a great hobby, but I like working with people. I just love the science behind it, learning how the body works. That, to me, is much more interesting and much more challenging.” 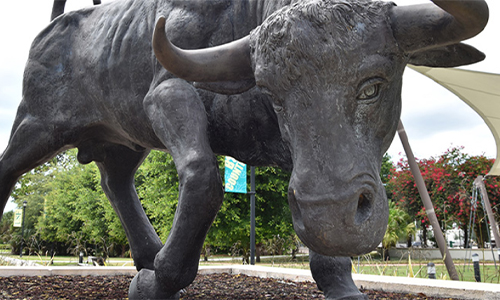