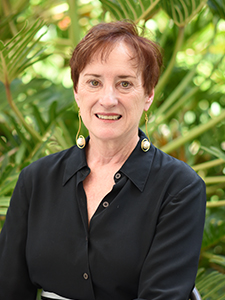 Jody L. McBrien is a professor in the College of Arts and Sciences at the University of South Florida Sarasota-Manatee campus. She received her doctorate in Educational Studies from Emory University in May 2005. She has received numerous awards for her research on international refugee resettlement, including a 2019 Fulbright Award, 2017 USF Global Engagement Award, 2017 USF Sarasota-Manatee campus Research Award, inaugural 2017 Research Travel Award from Wiley Publishing, 2014 Ian Axford (New Zealand) Fellowship in Public Policy, 2012 Community Engaged Researcher Award from the Florida Campus Compact, and 2011 Faculty Research Award from USF Women in Leadership and Philanthropy. In 2019 she provided an evaluation of the Mangere Refugee Educational Centre in Auckland, New Zealand, as a Fulbright Specialist. During Spring 2017 she was a Visiting Scholar at Soka University in Tokyo, Japan, where she taught a class and researched Japan’s pilot refugee resettlement program.

Dr. McBrien’s service and much of her research focuses on children affected by war, whether they are resettled refugee students and their families, or children and families who have returned to their home communities following war. In June 2019, she edited the volume Educational Policies and Practices of English-Speaking Refugee Resettlement Countries, published by Sense/Brill.  She has explored the connection between discrimination and academic motivation in adolescent refugee girls and evaluated refugee agency programs working to create bridges between new refugees, social services, and schools. She conducted longitudinal work in Lira, Uganda on the use of arts in healing and education. Based on her work in Lira, McBrien’s co-edited book, Cold Water: Women and Girls of Lira, Uganda, was published by Fountain Publishers in July 2015.

Dr. McBrien worked in the corporate world in education-related jobs prior to returning to academia. She is the former Senior Education Editor of CNN’s education website, and served as the Project Manager and Senior Editor of a high-school curriculum entitled Media Matters: Critical Thinking in the Information Age. She has also been Director of Communications at the National Reading Styles Institute in Long Island and Editor-in-Chief at the Family Education Network in Boston.