She has served on the boards of the American Association for the Advancement of Science (AAAS), ACT, Inc., the Association of American Medical Colleges (AAMC), the American Council of Education (ACE), the National Association of State Universities and Land-Grant Colleges (now APLU), the Association of American Universities (AAU), the Council of Graduate Schools (CGS), and Accreditation Council for Graduate Medical Education (ACGME), Washington Advisory Group (WAG), among others. Dr. Holbrook has also participated on advisory panels and councils for the National Institutes of Health (NIAMS) and was a member of the Advisory Committee to the immediate past Director of the NIH (Elias Zerhouni). She currently serves on the boards of the Institute of International Education (IIE), CRDF Global, Bio-Techne, Academic Assembly, Inc., INTO USF, and is the immediate past board chair for Oak Ridge Associated Universities (ORAU) and until recently, served on the Board of Trustees for Embry Riddle Aeronautical University and King Abdullah University of Science and Technology (KAUST). She is a Distinguished Fellow of the Global Federation of Councils of Competitiveness (GFCC).

Dr. Holbrook was an active biomedical researcher and NIH MERIT Award investigator early in her career. She earned bachelor’s and master’s degrees in Zoology at the University of Wisconsin in Madison and a doctorate in Biological Structure at the University of Washington School of Medicine where she served as a postdoctoral fellow in dermatology, faculty member and research administrator.

She is married to Jim Holbrook, a physical oceanographer who spent his career with the National Oceanic and Atmospheric Administration (NOAA) at Pacific Marine Environmental Lab in Seattle, Washington and in Washington, D.C. They have one married son, James who is the Senior Art Director and Producer for ABC World News in New York City.

Eddie Beauchamp serves as regional vice chancellor for business and finance. Beauchamp previously worked at Georgia Gwinnett College (GGC) in Lawrenceville about 30 miles northeast of Atlanta, where he served as vice president of operations.

During his time at GGC, Beauchamp played a pivotal role in the campus’ rapid expansion, helping it increase from 118 students in 2006 when the college opened to more than 12,000 students today. GGC is a four-year college with 15 majors and 42 concentrations. 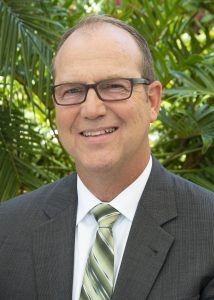 Dr. Kemker is the Regional Vice Chancellor and Vice Provost for Academic Affairs and Student Success. He has served in a variety of campus leadership positions for more than two decades, most recently at the University of New Orleans and the University of Southern Mississippi. For the past six years, Dr. Kemker has served as the UNO dean of students within the Office of the Provost. As a member of the President’s Executive Cabinet, Dr. Kemker played a lead role in the development of the school’s master plan, which included centralizing all student-related services and re-branding the institution.

Dr. Kemker served as assistant provost at Southern Mississippi from 2009-2012, as associate dean of the USM College of Health and chair of the Department of Speech and Hearing Sciences. In addition to earning a B.A in communication sciences and disorders at USF, Dr. Kemker earned an M.A. and Ph.D. in communication sciences and disorders at the University of Florida. He was an assistant professor at Florida State University within the Department of Communication Disorders from 1998 to 2004, and an associate professor at Louisiana Tech University in the Department of Speech from 2004 to 2006. Dr. Kemker has performed extensive research in cognitive functioning as it relates to sensory input; his work has been published in top-tier journals and presented at conferences worldwide.

Marrie Neumer joined the Office of Advancement as the senior director of development in January of 2020 and was promoted to associate vice president of advancement this past July.

She has spent her entire professional career working in higher education, first as a head swimming and diving coach for more than 20 years, then as a director of development, assistant dean and major gifts officer at Cornell University for 17 years where she led many successful initiatives, including fundraising for scholarships, hiring faculty and enhancing the student experience. Neumer also spearheaded fundraising for the new wing at Cornell’s I.M. Pei-designed art museum and was instrumental in completing the campaign to build Bill & Melinda Gates Hall, which houses computing and information science at Cornell.

A Certified Fundraising Executive (CFRE), Neumer grew up in Rochester, New York, and received a bachelor’s degree at the College of Wooster (Ohio). A four-time NCAA Division III All-American swimmer, she went on to pursue a master’s degree in exercise physiology at Springfield College (Massachusetts) and spent the next two decades coaching at Springfield College, the University of Rochester, the University at Buffalo and Cornell University.

Also, he is the Director of the Institute for Public Policy and Leadership at the USF Sarasota-Manatee campus (IPPL). The Institute engages strong academic resources at USF as well as local, national and global experts to guide a dynamic exchange of ideas about important policy and leadership issues. IPPL hosts lecture series, policy forums, seminars and workshops to stimulate meaningful, civil discussion and promote public discourse in our community. As the leader of IPPL he serves on the Government Issues Council of the Greater Sarasota Chamber of Commerce, the Career Edge Regional Workforce Council, the Government Affairs Committee of the Lakewood Ranch Business Alliance and Chair of the Legislative Committee for the Manatee Chamber of Commerce.

Before joining USF in 2011, he served as Deputy Legislative Director for the office of Congressman Adam Putnam who represented the 12th District; which included portions of the Tampa Bay area and central Florida in the United States House of Representatives. Prior to his position in Washington, D.C. he worked in the Florida House of Representatives and the office of Florida Governor Jeb Bush. He also represented two of Florida’s largest agricultural trade associations at the U.S. Congress and various federal agencies. He is a graduate of the Florida State University with a bachelor’s degree in Political Science and History. He is a Sarasota native who is a past president of the Florida 4-H Foundation and a member of the Mote Marine Laboratory Advisory Council.

Dr. Greg Smogard is the Assistant Vice President of Innovation and Business Development. He leads the campus’ business engagement efforts with a focus on creating and enhancing mutually beneficial partnerships with businesses by leveraging the university’s resources and innovation expertise.

He has worked at Fortune 500 companies and global brands in more than 40 countries and held management positions at American Express’ Latin American Division, Blockbuster/Viacom and other major corporations.

Recently, he worked at the Center for International Business Education and Research (CIBER) at the University of Miami Business School, serving as director of the Innovators for the Americas program, an experiential entrepreneurship course that partnered Miami students and professors with their counterparts at four Latin American universities. He also participated in the Global Business Consulting program, which enabled MBA students to consult with international corporations.

Dr. Smogard is author of the book, “A World of Opportunities for Aspiring Entrepreneurs: Creating Your Own Job in the New Normal.”

Sandra Justice, CRA, was appointed Associate Director for USF Research & Innovation in 2020. She has served as a research administrator at USF for more than 15 years, leading the research office at the Sarasota-Manatee campus since 2017, with oversight for all Sarasota-Manatee campus research programs and grant services as a key member of the administrative leadership team of the Regional Chancellor.

She received a JRA Arthur Fellowship in 2021 for her study examining the impact of grant writing workshops on faculty productivity. Prior to her tenure at USF Sarasota-Manatee, she served as a grant administrator in the School of Medicine at Emory University. She is a graduate of the University of South Florida and holds CRA certification from the Research Administrators Certification Council

Posey served on the USF President’s Principals of Community Task Force and recommends members to diversity-focused presidential advisory councils and committees. He is the founder and chairperson of Effectively Removing Barriers and Raising Awareness through Cultural Excellence (EMBRACE), a community resource group, and he oversees meetings of the Regional Chancellor’s Advisory Council on Diversity, Equity and Inclusion.

Posey has organized campus-wide programming on racism and social justice, facilitated cultural competence workshops for faculty and staff and has helped organize several diversity-themed events, including the Diversity Lecture Series and a half-day mental health event for faculty and staff in 2020.

Posey joined the USF Sarasota-Manatee campus in July 2019 with nearly 20 years of experience working in higher education. He previously served as director of the Office of Student Life at Chesapeake College in Wye Mills, Maryland.

He is a member of several diversity, equity and inclusion committees on local community organizations, including the Manatee County Board of Education, the Sarasota County Economic Development Corporation and the Suncoast Chapter of Advanced Fundraising Professionals. Additionally, he is a proud member of Alpha Phi Alpha Fraternity, Inc.