Twenty-one educators, including eight professors from the University of South Florida, journeyed this summer to Montgomery, Ala., the cradle of the American civil rights movement, to learn more about the movement, reflect on its role in the nation’s history and develop ways to best teach the lessons they learned to today’s students.

Denise Davis-Cotton, director of the Florida Center for PAInT on USF’s Sarasota-Manatee campus, organized the three-day REACH Montgomery Museum Studies program for K-12 educators, as well as college professors. The program was made possible by a $8.5 million federal grant awarded last year for PAInT’s Race, Equity, Arts and Cultural History, or REACH, initiative, which provides sustained professional development by creating and disseminating arts-based materials and programming.

Davis-Cotton, who was raised in Montgomery, said the program gave her and the others a chance to brainstorm about what they were learning about slavery, emancipation and the civil rights movement and to create lesson plans and curriculum to bring back to their classrooms. 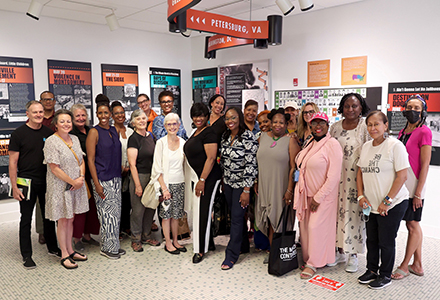 Participants in the REACH Montgomery Museum Studies program visited several museums and other sites that commemorate the civil rights movement in the United States.

“I’m glad the REACH grant provided that space, provided that opportunity and will create access for future learning along our K through higher learning educational systems,” Davis-Cotton said. “Those conversations that started with the professors, who were there to collaborate with those K-12 educators, will be continuing and enduring because everyone learned from each other.”

That’s a lesson one of the participants, Ruthmae Sears, an associate professor of mathematics at USF, took to heart.

“We all have a role to play in taking knowledge to make a better world for others,” Sears said.

Teaching the often-painful, but also inspiring history present throughout the Montgomery area in ways that connect with today’s students is vital, said USF professor Dana Thompson Dorsey, because the struggle for fuller liberty in the United States is ongoing.

“For me, it was a matter of being reminded of how far we’ve come but how far we still need to go,” said Thompson Dorsey, associate professor of educational leadership and policy studies, on what she learned during a visit to the The Equal Justice Initiative’s Legacy Museum in Montgomery.

During their time in Montgomery in late July, the participants visited several museums, monuments and historical sites that commemorate the civil rights movement, including Dexter Avenue Baptist Church, where the Rev. Dr. Martin Luther King Jr., began his career.

The hotel where the educators stayed while in Montgomery was near a building where enslaved Africans were warehoused before they were taken to market. Elizabeth Hordge-Freeman, an associate professor of sociology, said she had not been familiar with the full extent of Montgomery’s importance to the civil rights movement.

“The road that we walked in Montgomery was the road that our enslaved ancestors walked to be sold,” said Hordge-Freeman, who is also USF’s interim associate vice provost for faculty recruitment, retention and engagement. “That experience was so powerful in ways I didn’t expect.”

Hordge-Freeman said she was particularly impressed with how The Legacy Museum went beyond what students might learn about the civil rights movement from a textbook and told stories in different, more engaging, more complete ways. For instance, the simulation of the slave ship voyage across the Atlantic and historic advertisements offering enslaved people for sale, among other features, highlighted the severity of this experience. 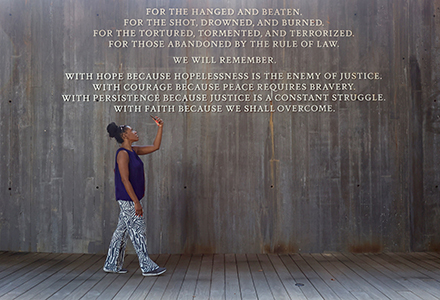 Elizabeth Hordge-Freeman was one of eight University of South Florida professors who participated in the REACH Montgomery Museum Studies program.

“Part of the motivation for the trip was to guide teachers on how to critically process content related to the civil rights movement and related historical events,” Hordge-Freeman said. “In addition to the content, the style in which information is presented can be equally transformative. The museum offered a model for engaging different mediums, even art forms, as a way to help people connect to and understand the horrors of slavery, while capturing the humanity of those enslaved.”

Hordge-Freeman said the trip led her to want to know more about the life of Rosa Parks after the Montgomery bus boycott of 1955-56.

“To be inspired by a story and then be so inspired that you begin to research to learn more independently, that’s what we want students to be able do when they leave our classrooms,” she said. “I felt like that’s what I did, and I think that’s a testament to the powerful impact of this trip."

In addition to Davis-Cotton, Sears, Thompson Dorsey and Hordge-Freeman, other USF researchers who went to Montgomery were:

“Words are inadequate to describe this experience,” Cobb-Roberts said. “I've been teaching about and researching issues related to history, culture and social justice for over 25 years. However, my time in Montgomery for the REACH civil rights tour reminded me there's more to learn and work to be done. I'm grateful for this opportunity and the space to collaborate with educators committed to educational change.” 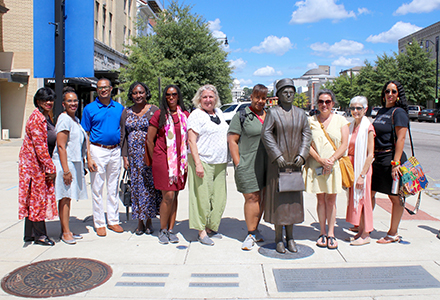 Participants in the REACH Montgomery Museum Studies program stand near a statue of Rosa Parks, who inspired the bus boycott of 1955-56 in Montgomery, Ala.

Participants said Davis-Cotton, who was honored for her work by the Alabama House of Representatives in July, was very intentional with how she organized the program by giving them several opportunities to engage with Montgomery residents who had been part of the civil rights movement.

“Going there was surreal because you are meeting people who are related to people we have read about,” said Thompson Dorsey. “It put you in this place of history. It did make me feel a real sense of responsibility for carrying on a legacy just by being in a place that holds so much bad history, but also a place that is like the home of where civil rights was born.”

While in Montgomery, Thompson Dorsey said she reflected on what she was learning in the context of her work on racial equity and how laws and policies can be used to inhibit Americans’ rights. She said she was particularly moved by an exhibit at The Legacy Museum that showed that Alabama did not strike down its ban on interracial marriage until 2000, 33 years after the Supreme Court ruling in Loving v. Virginia declared such bans as unconstitutional.

“All of these rights that we take for granted, that we think we have, we really don’t,” Thompson Dorsey said. “They are quite tenuous. We don’t know how easily they can just be taken away. I was reminded of that as we walked through these museums.”

Other sites in the Montgomery area that participants visited included the Civil Rights Memorial Center at the Southern Poverty Law Center; the National Memorial for Peace and Justice; the Rosa Parks Museum; the Mothers of Gynecology monument; and the Freedom Rides Museum.

Davis-Cotton said the same participants will visit the Smithsonian Institution in Washington, D.C., for a program focused on religion next year.

The visit to Montgomery was a resounding success, she said, in presenting to participants a more complete, richer history of the civil rights movement.

“The whole story needs to be told through different settings, through curriculum, through different experiences,” Davis-Cotton said. “We have been victorious in our efforts to bring awareness in an insightful way to others across the country, outside of USF, who are looking to forge a new direction in education.”