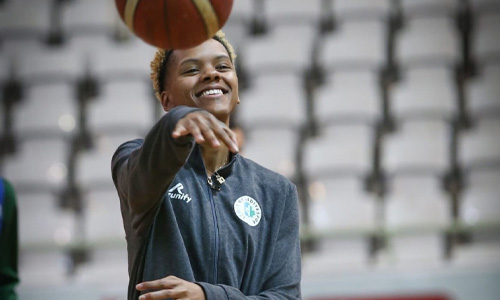 USF alumna and WNBA star Courtney Williams will be featured as part of the USF Sarasota-Manatee Diversity Lecture Series during a webinar April 15 at 2 p.m. on Zoom. Williams will discuss equity and women in professional sports. Please click here to register and receive instructions for accessing the webinar.

Williams broke USF and American Athletic Conference scoring records and finished as the Bulls’ all-time leading scorer with 2,304 points following her final collegiate season in 2015-16. She is one of the WNBA’s rising stars and joined the Atlanta Dream on Feb. 19 in a three-team trade.

Williams, a 5-foot-8-inch shooting guard, has averaged 11.4 points per game in her first four professional seasons. She was selected eighth overall by the Phoenix Mercury in the 2016 WNBA draft, becoming the highest-drafted player in USF program history.

USF Sarasota-Manatee Regional Chancellor Karen A. Holbrook, PhD, will deliver opening remarks. The event sponsor is the USF Sarasota-Manatee Office of Diversity, Equity and Inclusion, and invited guests are the USF Title IX Office and the USF Black Leadership Network.

The webinar will include a question-and-answer session.